Moon Pies Over Charleston and more

Last week I finished this little wall hanging, called Moon Pies Over Charleston. It has been donated to the charity fundraiser auction for the Charleston Unitarian Church, which is celebrating its 200th anniversary. It is also the 100th anniversary of Moon Pie snack cakes and of course the full solar eclipse happened here, so the auction committee chose a moon-y theme. 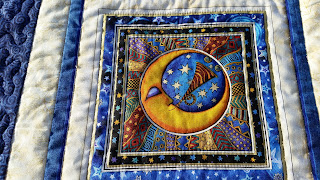 Well, who can resist a theme like that, when one has the PERFECT fabric in one's stash?? Here's a shot in the brighter sun that shows how pretty the fabric is. The suns and moons are from a Dan Morris panel. I just added a few borders and some minimal quilting. 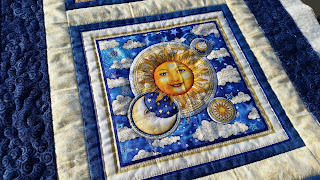 This panel only shows a partial eclipse, but the sun face is so pretty. Each panel has nice metallic accents and lots of true blues. 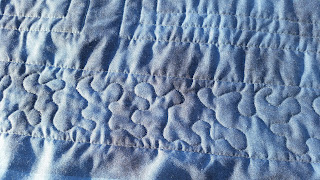 Mostly I did stitch in the ditch and outlined a few key features of each moon and sun face, then a quick stipple in the border. 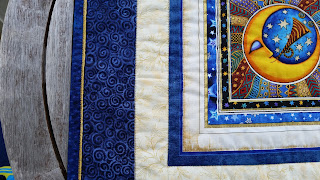 For the flanged binding, I used a gold metallic swirl for the inside and more blue for the outside. 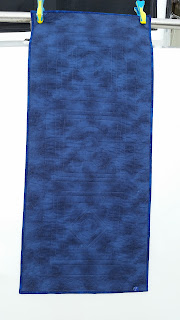 The backing is another mottled blue, and I put simple triangular corners to hold a dowel for hanging. Ha, I just realized the triangles are under my big clips so they don't show in the photo! The piece could also be used as a table topper.

I've temporarily joined the choir at this church, just until we leave Charleston in another few weeks. They've welcomed me with open arms, so donating a little piece seems like a nice way to give back. I brought the quilt with me this Sunday and met another quilter who said, "Oh, I'm so glad you made that! Now I don't have to make a themed quilt this year!" I guess she's been donating similar items each year and is glad to have a break. 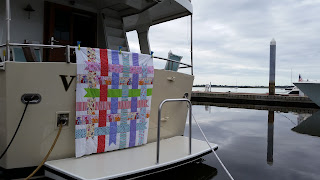 In other news, I pieced up this flimsy using Cloud 9's "Ribbon Box" free pattern and some of the fabric donated to Covered in Love.

After cutting all the fabrics, the pattern sews up pretty quickly in rows. I started with the top row, which has a few of the "ribbon" tails.

Then I did the bottom row...uh, that can't be right.  Riiiiiiip! 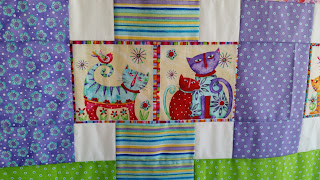 The fabric line is called "Cool Cats" by Henry Glass, and features these funny felines. I cut apart a panel and stitched the cat blocks into ribbons for this top. Now I'm waiting to buy some coordinating Aurifil thread before I baste this one up and quilt it. It will be fun to do different FMQ motifs in each color: purple, blue, yellow, green, pink, red. Such a bright, cheerful line! 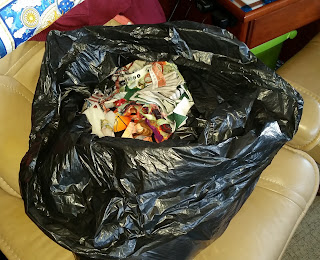 I leave you with this charming photo of a black plastic garbage back full of tiny scraps. Usually I sew up some dog beds and stuff them with this, but I just wanted it off the boat last week. So I listed it on FreeCycle and gave it away to a Girl Scout leader who will use it in a craft project for the troop. The girls will sew up cushions to sit on at the rest of their meetings this year and use this as stuffing. They will also learn about FreeCycle*, so it's a win-win!

*FreeCycle is a community bulletin board where you can list anything you have to give away for free. It's great for giving away the kinds of things that a charity shop won't accept, like partially used pieces of lumber or cardboard boxes, older electronics/appliances, even food. Members can also request items to be donated. It keeps things out of the landfill and clutter out of the boat, so I sign up for FreeCycle in most cities we pass through.
Posted by Louise at 1:25 PM