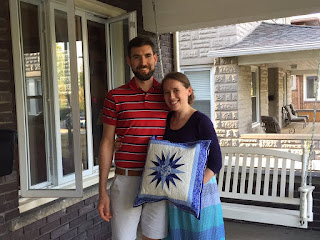 Good morning, quilting friends and family! It's a beautiful day in Charleston and even though I'm really missing DH Sean, I'm cheered by the warm responses I've gotten from a few gifts.

Aren't newly weds B&K cute? I made them the mariner's compass star block pillow after they said they both really like blue. I'm really glad they sent a photo, because I completely forgot to take any before I shipped it out. Tsk. B&K were married a few months ago, and B is also starting medical school. In order to keep up with his studies, they only opened a few wedding gifts a day. Such discipline! He can prop his anatomy book up on the pillow, or nap on the couch in exhaustion with it. Pillows are useful that way. 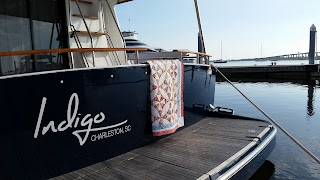 And speaking of the color blue, our friends here in the marina like it so well they named their boat after it. 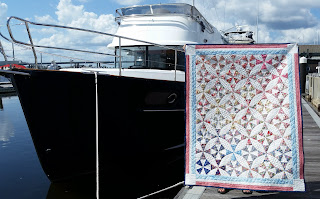 You saw the flimsy for this quilt a few weeks ago, and now it's finished, gifted, received and appreciated. It was made for Sean's aunt, who is having some health issues. I decided to name it Graceful, which goes nicely with her name, her personality, and the elegant kaleidoscope pattern. 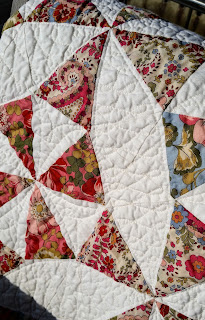 I did FMQ figure eights in the long white sections, and smaller loop de loops in the white triangles. This makes the patterned fabrics and the secondary circle motif really stand out. The fabrics are Moda Regent Street lawns, very fine and soft. 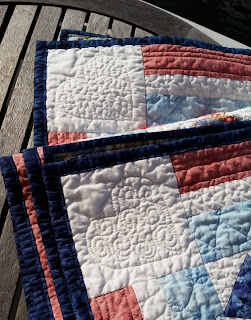 In the plain cornerstones, I quilted four hearts and did a different fill on each one. Sean's aunt is very dear to me, so I wanted to send this subtle love note. The binding is dark blue, to offset some of the pink in the borders. 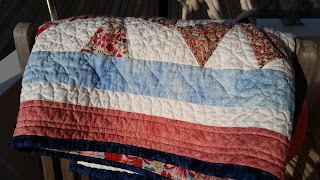 The borders got their own FMQ motifs: wider figure eights, ribbon candy, and parallel lines. 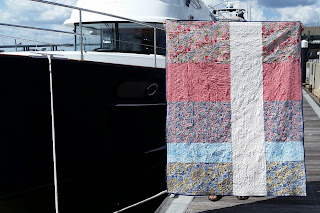 The back is most of the leftover pieces of lawn and border fabrics plus some lighter shirting material to make it big enough. 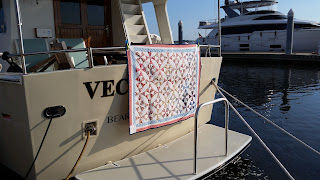 Here is Graceful on the back of our boat, Vector. Vector isn't very graceful and isn't painted blue. (A boat broker once told us there are only two colors to paint a boat: white and stupid. We choose a lighter shade of stupid than navy blue.) She's a sturdy little ship, but not swoopy and elegant like the go-fast boat in the background. We're surrounded now by huge, exotic yachts and often feel like the one person dressed in overalls at a black tie affair. 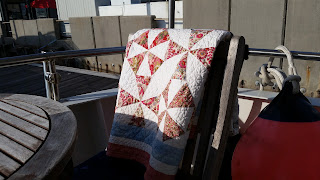 Sean's aunt really liked her quilt, so I'm happy. Sean arrived safely in St. Thomas and has relatively comfortable lodging (on a Navy ship, no less) so that's good news, too. There's tons of work for him, and he has been able to either text or call me each day. I'll post semi-regular updates about him on our travel blog. He wrote in his last post that I would update here, but it makes more sense to just use his blog, since his readers are not quilters.

Linking up with Can I Get a Whoop Whoop this week.
Posted by Louise at 8:46 AM