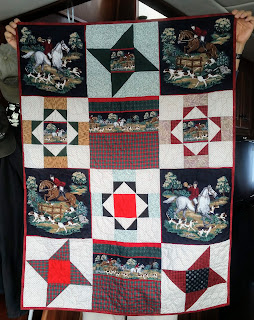 Today I'm sharing two wheelchair quilts I made for the Joyful Stitchers in Alabama. I shipped these to my friend Doris, who delivered them to the group to distribute to folks in nursing homes. These are quite small, only 36"x48", in order to fit on a lap without getting caught in any wheels. 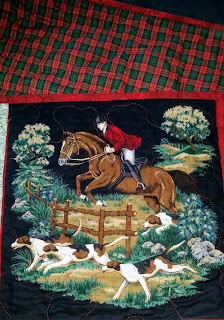 I thought it would be nice to make a couple of masculine ones. The first one features hunting themed panel blocks. The fabric has horses, foxes and hounds, and reminds me of my late step-father, Bob. Bob was a member of the Los Altos Hunt Club, which sounds very stuffy and la-di-da, doesn't it? Bob was a very down-to-earth guy though, and loved both horses and dogs. 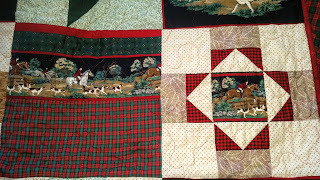 I had a few different red, green and black plaids that I used both on the back and as accent fabrics in some simple blocks. It's a teensy bit Christmassy, but I think that's OK, don't you? 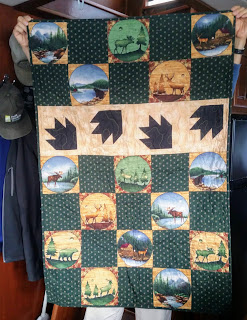 The second quilt features smaller panels that are also outdoors/hunting themed. Instead of the classic fox hunt though, the images are more rustic: a cabin in the woods, deer, bears, etc. There's a fisherman on the stream and even a moose or two. Meese? 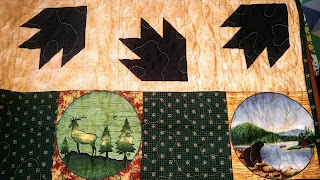 I added a row of bear paw blocks just to feel like I actually did something other than sew squares together. Nothing wrong with squares, though! 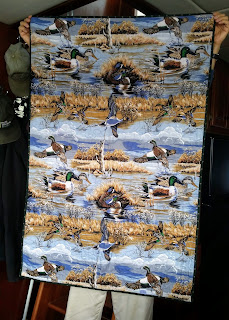 The back of this quilt uses this ducks-in-the-marsh fabric. I hope both pieces bring a bit of warmth and perhaps some fond memories of being out in the wilderness to a couple of gentlemen.
Posted by Louise at 11:52 AM 16 comments: 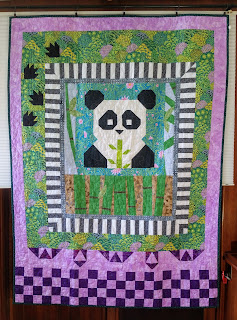 Hello, quilty friends! It's been a while, hasn't it? I took a little vacation from blogging, but not from sewing, so I have some finishes to share with you. This piece is Robin the Panda.

Robin is named after the way he was created, as a round-robin group effort. Five members of the Sunshine Online Quilt Guild, including me, added something to Robin's little world. 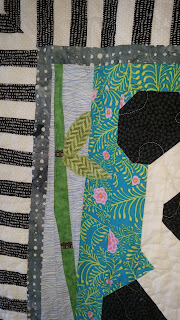 I made the center block and then shipped it across the country to another person. She added the forest at Robin's feet. Then the bamboo stalks and appliqued leaves to each side were made by another person. 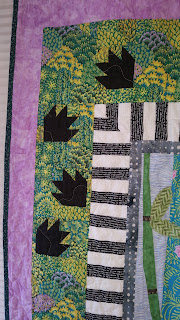 Then a black and white striped border was added. Then the darling bear paw print blocks were added. A purple outer border framed it all up. 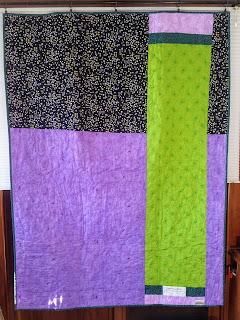 After the fifth round, it was returned to me for quilting and binding. Some of the purple fabric was sent to me by the final participant, and I used it as part of the pieced backing. 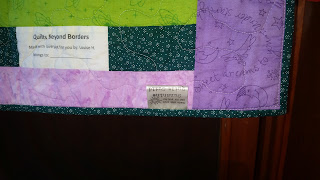 Robin the Panda was donated to Quilts Beyond Borders, one of the charities that Sunshine supports. I hope he makes a child happy! It was super fun to be part of a round robin. Have you ever sent blocks or a partially finished quilt to someone else for something like this?