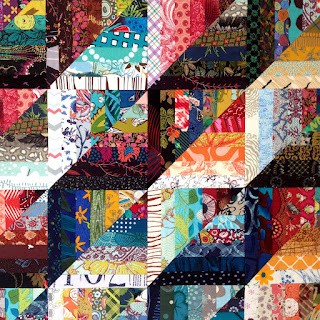 This week I've been inspired by this photo from Anita Grossman Solomon's website. This is her Self-Mitered Log Cabin, and she teaches classes on how to make it. The class description, including the materials list, gave me a few clues on how to create something similar for myself. I know it isn't exactly the same as her method, because she refers to vellum foundations and I did simple strip piecing without any foundation. 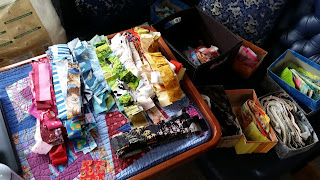 I decided to try a few blocks to see if my reverse engineering worked, just using scraps. The crux of the block construction involves choosing fabrics in the entire range of values from lightest to darkest. So I needed to lay out my scraps, and while I was doing that anyway, I did a bit of organizing.  Then while we were cruising down the Intracoastal Waterway between New Orleans and Morgan City, I sorted and selected strips. 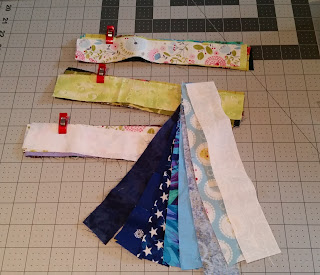 I chose groups of 8 strips from my blues, greens, purples, pinks and reds. In this photo, I have a grouping fanned out so you can see the range from light to dark. I kept the little groups together with WonderClips. Good thing, too, since the entire box of strip sets fell on the floor at one point. Doh! Being clumsy forces one to be more organized, I think.

Here are two sets sewn together, but not pressed yet. Color value work is a real challenge for me. I tend to purchase and use saturated brights in the medium range, so my quilts often lack contrast. Sure, they are bright, but too much bright can lack focus and movement. So this is a good exercise, even if I can only work on it in short bursts before my brain overloads. 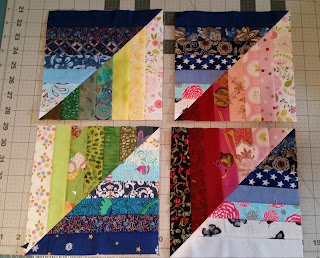 Here are a couple of final blocks. They are basically half square triangles sewn from two strip sets. The way they are combined, the dark part of one strip set and the light part of the other intersect in a way that sort of makes an ombre effect when multiple blocks are laid out. I think they are super neat!

I originally thought I would use my little groups of strips as a leader and ender project, but once my brain started chasing this SQUIRREL! it just wanted to keep sewing and sewing. 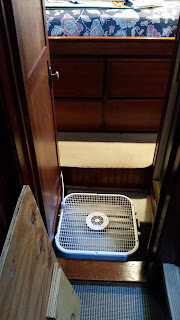 That's fine, because we had another episode of our shower sump overflowing and now the bilge needs to be dried out. This fan has been precariously perched across my studio doorway, making it a bit dangerous to step back and forth through here. I need to step inside once, and stay there for a while. The other WIPs I'm working on, two Hands2Help charity quilts, are at a stage where I'm laying them out on the bed in the other room and then carrying pieces from the bed to the sewing machine or ironing board. That means crossing the fan threshold too often, so they'll have to wait for another day to continue working on them.

wow.. those blocks are really striking.... well done for working that out...
Hugz

I just admire how you can machine sew in a boat ! I seem to create such a mess when I do anything and take over the whole house

Louise, your blocks are so colorful! And your method is woking beautifully! Watch you step!

I think I may have seen Anita on a quilting show at some time and I'm sure that she did a little demo of this technique, looks familiar. Your blocks are looking so good, hope you carry on with these and show us your progress - just watch out for the fan!

I am loving seeing what you are doing with these,it's gonna ba a gorgeous quilt. Doesn't look to me like you were having any trouble at all making them. Your method seems to work just fine.

Working with color values can be tricky. You did a great job. Can't wait to see your quilt with these blocks. Hope everything gets dried out. With the humidity it can take awhile. Safe travels.

I love those blocks together like that. The values make all the difference!

It's an interesting block Louise, I'm not familiar with Anita, thank you for the link. I think your blocks have turned out just as well, they will make a lovely quilt I think. I hope you get your shower problem sorted soon, I do admire your lifestyle.

I think you are doing a fantastic job with the color values for your blocks. That will be a very rich looking quilt. Do be careful going in and out of that room--and I hope all dries out quickly. Happy travels!

Ooh! Those blocks turned out fantastic. I'm glad you were able to figure out what your needed to do to make them. This is such a great exercise for working with value... I may need to try it. :)

Now that is a great exercise in color value! Very similar to the class I just went to. You're doing a GREAT job at it, Louise, but I totally get the brain overload thing when it comes to picking the fabrics. Yup! I have to take a break too. :)