Blog silence but the Juki is humming 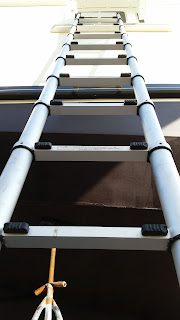 We have moved back aboard the boat, hooray! It actually happened right after my last post. The boat was still out of the water, so getting aboard required climbing this loooong, wobbly ladder. All the stuff we had moved into the RV also traveled up a ladder to return to its boatly home, so it was a pretty tiring process.

All my fabric and the tops I stitched up in the RV ended up in a giant pile on the bed in my sewing studio (also known as the second stateroom.) I decided to finish adding borders and sew backs for all the tops, then baste them all in an exciting week of March Basting Madness. 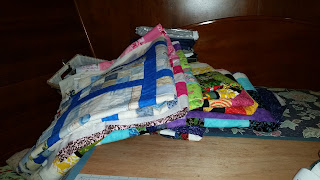 I didn't take any photos during the basting, but you can read here about my on-the-bed technique.  Here's the stack of basted pieces, ready for quilting. I basted eight and I'm feeling quite industrious. I've decided which three will go to the three charities in the Hands2Help Challenge, plus one for Covered in Love. H2H has the earliest deadline, so I'll work on those as soon as possible. 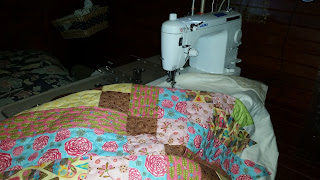 Today I started quilting Sweet Astrodelic, even though it isn't for H2H. That's because I'm using a backing fabric that isn't standard quilting cotton. It's a very cute little yellow rooster print, but seems to be thicker and more loosely woven. I want to use the same fabric on the much larger Veggie Mountain, but only if it quilts and washes up well on this piece. 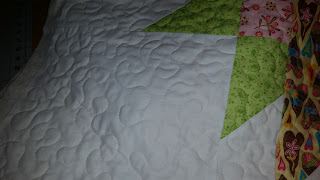 Sweet Astrodelic is being quilted in a loose stipple, to keep it soft and get it finished quickly. If the backing passes muster, it will probably be a Project Linus donation. If it falls apart or shrinks strangely, I'll be sad but not devastated.

I've already learned something important on this quilt. My Juki does NOT like Connecting Threads brand thread! I broke three needles before I figured out it was the thread. That was three different brands of needles, too. Very strange! My theory is that the thinner Aurifil that I usually use glides through the eye of the needle more smoothly and is less likely to "catch" as I free motion quilt. In any case, after I switched back to a very similarly colored Aurifil 50 weight, I've had no problems and the thread change is undetectable on the quilt.

I sent Kat one of the extra spools of Connecting Threads that I had, along with this month's blocks. Kat, if it works in your machine, I'll send you two more spools. If not, toss it in the trash! 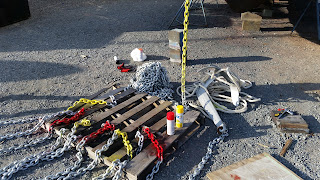 And speaking of spools, here is our 400' long anchor chain, all spooled out on the ground. We mark it every 50 feet with alternating red and yellow paint so it's easier to keep track of how much we have left. The length of chain used to anchor depends on the depth of the water, so it's important to keep track. Over time, the paint wears off and needs to be renewed. This time, we also had the entire chain re-galvanized, so it looks shiny and brand new! I'm rather unnaturally excited about this, so I'm sharing it with you, my quilty friends.
Posted by Louise at 3:41 PM

Glad for the update! Looks and sounds like you've gotten a lot done! Great job! Are you going to take a video when she goes back in the water? That would be cool! And be careful on that ladder!

Great you are back on the boat, I wouldn't fancy carrying everything up the wobbly ladder though. You have been very busy getting all the backs and basting done, I spray basted one last week, it is still sitting waiting for me to have time to start the quilting but as I have never spray basted before I'm concerned I may have to re iron it before I start in case the layers are coming apart again. Machines can be very temperamental can't they? My Bernina 440 just got on with it but Baby, the Bernina 770 likes to have the odd tantrum.

Sounds good Louise, thank you! My regular machine, which I free motion with occasionally but mostly straight stitch, likes Connecting Threads just fine. For my free motion machine only aurifil will do. So temperamental these machines!! :-)

You did good to get all those basted. You'll really feel accomplished to get them all quilted up too! I hate heights so that wobbly ladder would not be good for me, LOL

Moving back sounds like quite a task, but I know you are thrilled. I hope you are back on the water soon.

Loved the photo of the chain with the different colors.

How good to be back HOME! Yay! My goodness, you have been a working machine. That's good that you were able to figure out it was the thread. Have you ever heard of their being an issue with thread based on the color? It seems like I had a lot of problems using black thread the last time I used it and when I switched to the next color, no problems at all. Hmm!

what a fun post.... up and down the ladder, heaps of basting done there. I like a good old stipple though I see it is scorned quite often. It's very forgiving I think. I like that Aurifil too for quilting and have been building up my supply of colours. I'm so glad you are excited about your colourful chain.... made my day too!
Hugz

So glad to hear you are back home. It's nice to get quilts basted so they are ready to quilt.

LOL!! I like reading about your boating life....I'd be excited about the colorful chain too! And so excited for ya that your back "home".