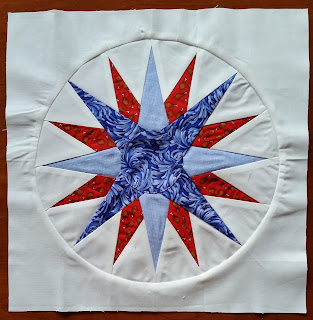 Yesterday I stitched up two "mariner's compass" star blocks using a ruler that I purchased at the big Houston show in 2015. It's the first time I've used the ruler because the instructions were a bit daunting. 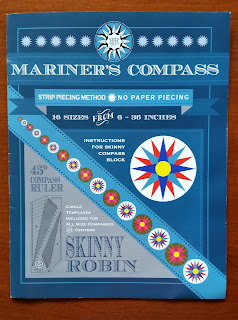 The ruler is called "Skinny Robin," and I think it was named after the inventor's daughter. The mother/daughter team demonstrated the ruler at the show and made it look super easy. Ha! 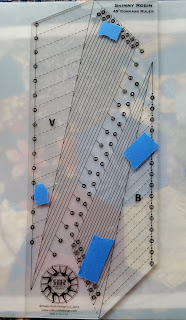 Here's the ruler. Sorry about the bits of blue tape, but they were necessary for me to keep track of what lined up where. The ruler can be used to create 16 different sizes of stars, so there are a LOT of lines and circles and teensy little numbers on the ruler. I made 10" blocks; the 8" and 12" lines are very, very close to the 10" lines. Sheesh. 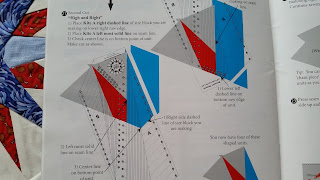 Here's part of one of the SEVENTEEN pages of instructions to make a single star from the booklet. I bought this ruler because I didn't want to make a paper pieced star because, you know, paper piecing is complicated. Um, yeah.

The star at the top of this post was my first trial block. There was a lot of head scratching and grumbling during the construction, but I actually didn't have to rip or re-do anything. When followed step by step, the instructions do work well. The hardest part was actually sewing the circular star block into the square of background fabric. I made it red, white and blue so I can donate it to Kat's July/August block drive for Covered in Love. The red fabric is fried chicken drumsticks! 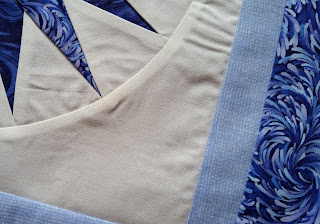 The second block went together much faster. Like taking 20 minutes vs. 2 hours faster. It is a secret squirrel project, so here's just a glimpse. The wrinkling you see in the white fabric on both stars is from setting a circle into a circle. All those bias edges tend to get a bit distorted, but I know they will settle down during quilting, and after washing will disappear completely.

So after two blocks, I admit that I kinda like this ruler. It doesn't make a truly traditional Mariner's Compass, but the resulting 16 point star is quite nice. The points are very pointy and I didn't have to tear any paper. The stars start from four strips of fabric and the amount of cutting waste is acceptable to me. I'm thinking I might try some wild, scrappy combos since my scraps bins are already full of strips that are a good width for this 10" size star. 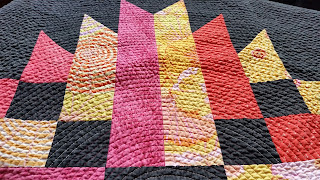 In other news, Bright Astrodelic washed up  nicely. I love how uniform the crinkliness is on the spirals. The stiff black mottled background softened up quite a bit and the quilt is good and drapey.

Wow! Well they look really good. Good for you for sticking with it!

Wow! I am so impressed! Great job.

That ruler and its instructions would make me sea-sick in so many different ways. Congrats for conquering it! Love that Astrodelic quilt.

Clever ruler, people do manage to make them look so easy at shows (but then they have had loads of practice). I just love how your spiral quilting has come up...
Hugz

Neat ruler, I love Mariner's Compass blocks. Like the colours your using.

Glad you stuck with it and now feel like you'll make use of it. That block is very nice!

Yay! You took the plunge! And they turned out great just like I knew they would. You are amazing. Do you think you will ever make an entire quilt using these blocks?

The seventeen pages of instructions would be intimidating, but it turned out nicely.

You really outdid yourself with those blocks. Amazing results. And then setting the circle in the circle. Congrats on a fine job!

I'm so impressed! That's a block if I've not attempted!

Would you believe I have never heard/seen this ruler before! I like what you accomplished with it.

I cant believe you made two in an afternoon! i have never made one, looks way too hard