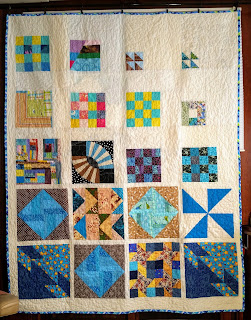 This quilt was a bit of a failed experiment that turned out fine in the end. I had a rather random assortment of orphan blocks that each had at least a little bit of turquoise. The puzzle was how to deal with each of them being a different size. The largest is 12" finished and the smallest is 4" with some oddballs in between like 9 7/8". I decided that making each one the bottom left corner of a block with scrappy cream backgrounds could work, with the quilt getting lighter and more open toward the top.
I think the top half works pretty well because the differences between the blocks are large enough for your eye to see a gradation. At the bottom, though, 12" and 11.5" look pretty much identical! But those larger blocks do give weight to the bottom, allowing the small blocks to float above. So I'm calling it good enough to podium in the Orphan Block Olympics, if there were only four contestants. 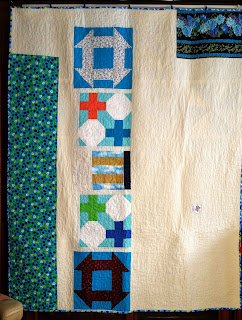 The back also didn't quite live up to my vision. I like the column of extra blocks against the cream, but filling out the rest with turquoise scraps is...clunky. It's fine, it's the back, but...meh. I also put the Covered in Love label on smack in the middle of the cream section. Hello? Why? I don't remember!

I very much enjoyed working with all the cool blocks, however. Isn't this pickle dish block neat? And the crumb block is particularly complex and fun. I often wonder what project the blocks were originally part of and hope it turned out well! Meanwhile, I'm calling my results "mod" because of the negative space and "alternative gridwork." That's fancy talk for, "It didn't really line up the way I expected it to." But it's soft and snuggly and perhaps someone's favorite color and that's what counts.
Posted by Louise at 9:31 AM

so glad you're back! i' ve missed you! and: I LOVE LOVE LOVE that "mod" orphan quilt- such a VERY VERY VERY great idea and job!

What a clever use of those orphan blocks. All so different in every way. The finished quilt looks fantastic. Your binding choice is perfect.

I do like how this one turned out. The size gradient is cool! Great job.

It's really cool and so enjoy seeing this quilt.
Those orphan blocks do come in handy once we have enough of them.

I think it turned out pretty well, actually. It has a funky, modern vibe. Someone will be delighted with this quilt, I'm sure!

I am so glad you puzzled this one out, you are just so good at that!

I think that turned out great, Louise! You found a really creative way to use blocks of all different sizes, and it works. We award you the gold medal!

Now THAT was a creative solution - and fun, too! (I can imagine the blocks getting smaller as the scraps left over got smaller and smaller)

Brilliant! Very creative use of the blocks despite their varied sizes. Someone will love this. And thanks for using my blocks.

I'm the judge of this quilt & it received the Gold Medal in the Orphan Block Olympics!
I hope you never loose your creativity because it allows you to make some really beautiful & unique quilts. This quilt is awesome.
Kat is so fortunate to have you as Headmistress of the Orphan Block Orphanage. You never let a single block down when it comes to placement, color, technique & finishing. Thanks so very, very much!

This is really cool! I never would have thought of using the blocks this way.

Great use of those orphan blocks, Louise!! One may not be able to tell the difference between the 11.5 and 12" blocks, but I don't think that really matters. In my opinion, this quilt is a total WIN!!

Wow, you did it again! It’s crazy and unconventional and creative and it works! Your mod contender would medal in any Orphan Scrap competition!

Your creativity knows no bounds! I think the floaty feeling comes through perfectly. This has been a fun sit catching up on all your makes!

I think this quilt works really well. Tres modern! I agree the turquoise on the back looks clunky but ya gotta work with what you have. The overall result is great!

Lol, I love your positive attitude. It turned out great! You're so clever.

I think your quilt is so beautiful and how fun to use orphan blocks to create such a beauty.

Love the quilt and what a super name - Mod Hodge Podge!!