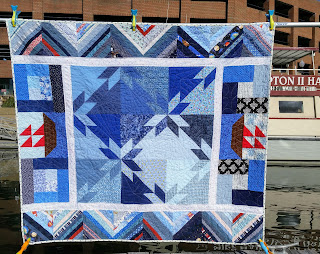 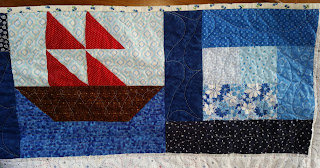 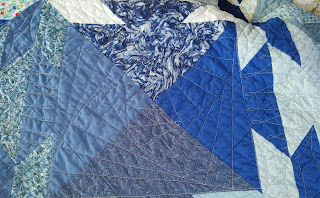 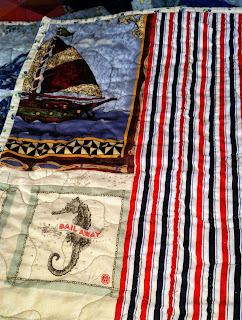 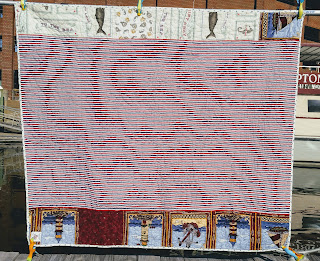 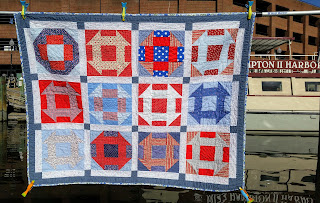 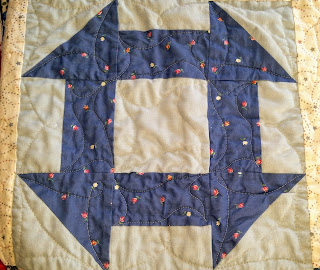 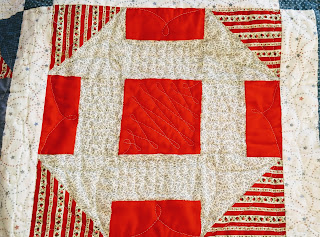 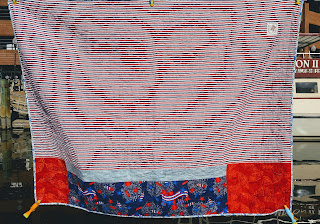 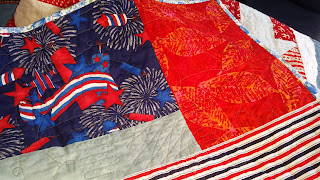 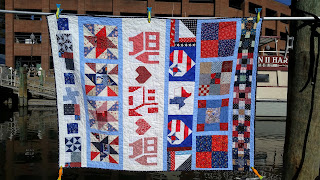 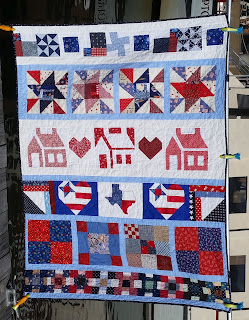 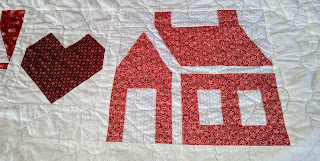 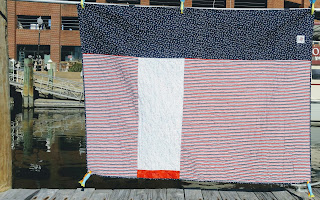 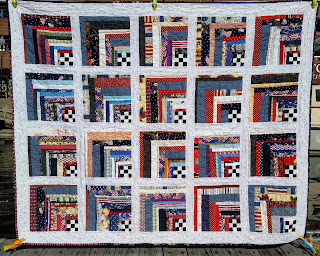 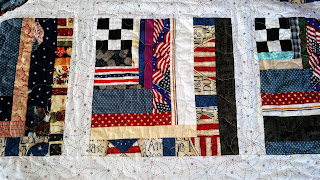 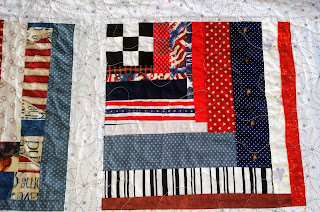 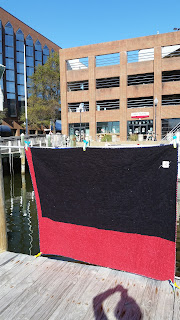 Well, since RW&B are some of my very favorite quilts I had to read & study this blog several times. The first one is such a pleasing site & I love what you did with the little sailboats. Glad I could help you with the binding on it & on the second one.
Love the Deep in the Heart of Texas quilt. Since Texas is my homeland, it really speaks to me. You outdo yourself with each new quilt when it comes to the quilting process.
Thanks for your wonderful help to CiL for those quilts. Looks like the folks on the other side of the water got to see a nice quilt show when you were taking the pictures.

What fantastic quilts! I love the Hunter stars on the first quilt.

I love them all and just jump for joy when I see all the clever designs you’ve come up with using orphan blocks and bits. My favorite is the blue one, but I love the idea of using those little nine-patches as the hearth part of a quarter log cabin. I’ll have to dig through my copious scraps to see if I have little novelty print squares that I could use that way in a string quilt for QFK

Yay on the patriotic quilts, and you did a great job putting orphans and "steals" to good use. I can tell you enjoyed that Texas one in particular. I love the log cabin quilt and how each block started with a nine-patch!

I'd say you wrangled up four fabulous quilts! I'm all for finding bargain fabric and then using it, so it was fun seeing the stripes show up in three of the quilts. The idea of a flannel-backed quilt is very enticing during these cold days in Minnesota, but I know what you mean about the heft of it. Great job on the quilts, Louise! You have been busy!

No, I can’t pick a favorite because each is special in its own way. I do have to say, though, that the depth of the last quilt with the nine-patches is striking. I really enjoy your explanations of how you made the decisions along the way. And I’m loving your boaty quilt show!

You really have outdone yourself Louise! So when you start a quilt using all these different components do you plan your whole quilt before starting or do you wing it and just add as you go? You do such a good job of making it cohesive.

I always enjoy seeing the fun ways you mix orphan blocks together and create fabulous quilts. It wasn't until today, I realized that you are a magician. These quilts are wonderful! The Texas quilt is my favorite, but I love the 3 dimensional quality of the quarter log cabin block quilt. Thanks for the inspiration.

They are ALL fantastic quilts, Louise!! The 1st one literally took my breath away, as I absolutely LOVE your Orphan Block quilts. I am also quite fond of the string-y goodness of that last quilt. You did a fantastic job on each of these donations for Covered in Love!

All four creative and beautiful!

Louise, I am so, so behind with reading blog posts and signed in to find I have missed three from you! Where on earth do I begin - I have to say I haven't yet read all your responses to questions asked after your video tour but what I have read so far makes great reading - I'll continue on later. Now you have made heaps more quilts, I'm always amazed at how you produce the number of quilts that you do when you're living on the ocean, I'm finding it difficult enough to finish one on dry land!

I'm not a Texan, but that Texas quilt is really neat! And so perfect for Covered in Love. These are all great finishes, Louise!

some more great quilts which will be treasured...
Hugz

I love the way you featured those houses with the hearts and in the middle of the quilt. Nice work on all of these, as usual. You are amazingly prolific!