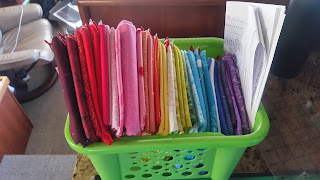 I am participating in the Postcards From Sweden Quilt Along. In my mind, I call it the "Swedalong," although folks less weird than me are using "PFS QAL." It's not too late to join in with Sandra and the gang if you want to make this fun, bright quilt. My fabrics were all selected from stash, and are mostly prints and blenders with a handful of solids. 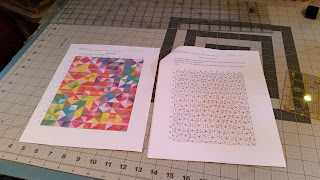 The pattern calls for 36 different Kona solids (for my non-quilting readers, Kona is a fabric brand) with names like "Capri" and "Cypress." I had to go through each color name and compare it to the color photos in the pattern to decipher some of them. Both of the above named colors are pale aquas. Who knew? I made a list of all the colors used in the pattern with their translations: 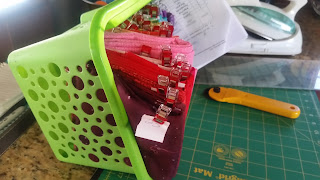 I found roughly equivalent fabrics and put them in rainbow order. I do love a good rainbow! However, the pattern refers to each color by number, and the numbers are not necessarily in color order. The dark reddish purple at the end in the photo is number 23 "Cerise," but that became completely irrelevant as the pattern progressed. I made little numbered tags that I attached to each color with Clover clips. 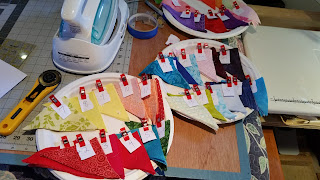 After selecting fabrics, the next step was to cut a certain number of squares from each color. The number of squares ranged from 1 or 2 up to 9. Each square was then cut in half into triangles. I then sorted my triangles in numerical order onto paper plates, being careful to always keep them clipped to their number. 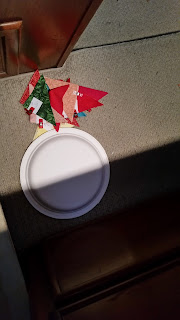 Good thing, too, since I'm kinda clumsy. Oops! Fortunately, my clipped numbers system survived this fall intact and no fabric was harmed nor tempers lost. 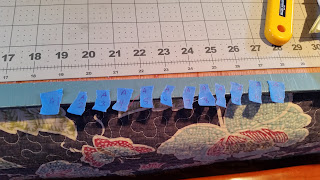 Choosing fabrics and cutting the triangles are as far along as the QAL has gone this month, but I was having so much fun that I kept going. I'm really not a quilt along-er so much as a quilt all at once-r. But don't feel bad if you're just cutting your triangles, because that makes you someone who follows directions better than I do.

The pattern next calls for pairs of triangles to be sewn back into squares. I've heard it said that quilting is just cutting up perfectly good fabric so you can sew it right back together again. So true. The pattern lays out the blocks in 15 rows of 12 squares. I chose to sew only one row at a time, and marked each block with numbers 1-12 using blue painters tape. I was able to reuse the tape all the way to row "O" although the tape stickum was pretty wimpy by about row "L." 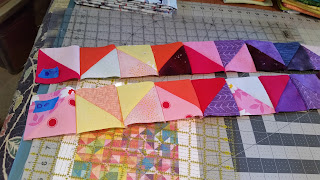 I can't tell you how many times I almost sewed block 4 to block 7 instead of block 5, or turned a block 90 degrees, so the blue tape kept me on the straight and narrow. After the row was sewn together, I only needed the correct letter, A-O, on the far left block, plus an arrow to show which way I pressed the blocks.

If you're getting ready to sew your PFS QAL blocks, I highly recommend using some sort of consistent numbering or lettering system. And keep in mind that each triangle rotates a quarter turn from all the ones around it. In other words, a block with the diagonal seam going from upper right to lower left ALWAYS joins a block that has the seam going from upper left to lower right. I also noticed that the two-triangle blocks were usually colors fairly close together on the color wheel. If you find yourself sewing together a blue and an orange, double check your numbers!

I managed to finish piecing all the way to row "N" before I realized I was short a #23 Cerise triangle because it got sewn into the wrong spot earlier. Spoiler alert: I chose to go the Amish route (you know, the myth that the Amish always put a mistake in their quilts because no human is perfect) and left the mistake in as a mark of humility. Or laziness. Or OMG THERE ARE SO MANY TRIANGLES NO ONE WILL NOTICE ONE MISTAKE!!
Posted by Louise at 8:48 PM

Email ThisBlogThis!Share to TwitterShare to FacebookShare to Pinterest
Labels: Postcards from Sweden, QALs