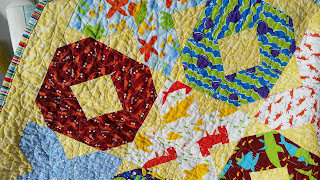 It's time to reveal some secret sewing! Recently I made baby quilts for two still-in-the-oven family members and they have been received by the expecting parents so I can share them here. 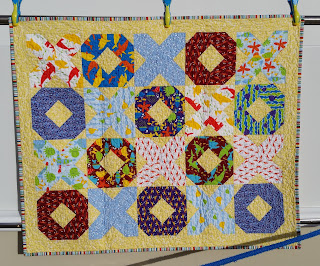 This one is called Hugs and Kishes, Covered With Fishes. The pattern is Hugs and Kisses by Lyn Brown, available for free here. I made it with a layer cake from Free Spirit fabrics. 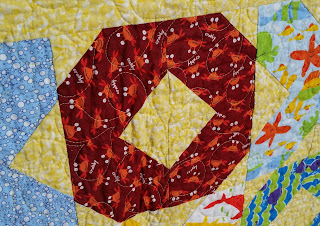 The fabrics feature sea creatures like whales, fish, sharks, and crabs. The crab fabric also says "crabby crabby crabby" all over it, which cracks me up! This quilt is for my cousins Greer and Nate. Nate's parents, the doting grandparents, are both marine biologists. I've made two other oceanic quilts for this family: Scuba Dog and Dive Path. 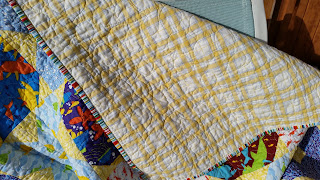 You'll be SHOCKED to see this yellow plaid as the backing. It really is great fabric and I still have yards and yards and YARDS of it left. Floppy feather quilting in yellow thread gives nice texture and snuggly softness. 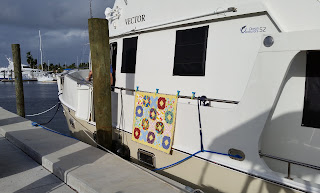 My cousins usually don't find out the gender of their baby until the day the little one arrives, so I thought these bright colors would work for them no matter what. 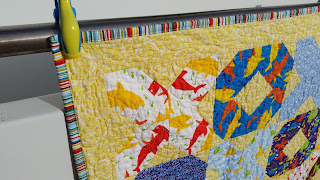 I had the perfect stripe in my stash for binding, too. The colors in the layer cake included an usual burgundy that was also in this stripe, even though they are two completely different fabric lines. 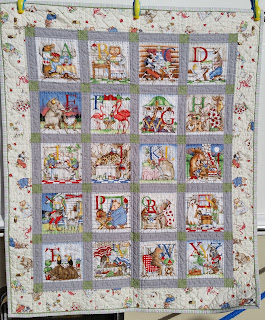 My brother's middle daughter, Charis, is just entering her third trimester. Charis and Nate (yes, another Nate!) are expecting a little sister for their darling son. I made Hungry Animal Alphabet for them. The panel is from Janet Wecker-Frisch, and features an animal, a food, and lots of other fun things to find that begin with each letter. 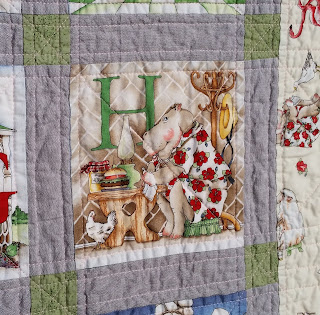 The drawings are really sweet and well done. Here's a hippo in a hibiscus housecoat, eating a hamburger near a hat rack. 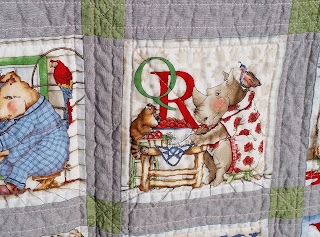 Who eats raspberries? A rhino in a rose-covered romper, of course! This one is my favorite because there's a quilt on the table and another hanging on the wall behind the quail. (The wall quilt is a bear paw pattern, if you must know.) 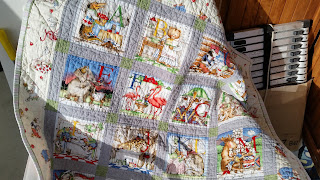 Charis is using soft colors in the bambina's nursery, so I bordered the panel squares with this nice tweedy gray Essex Linen and used sage green cornerstones. 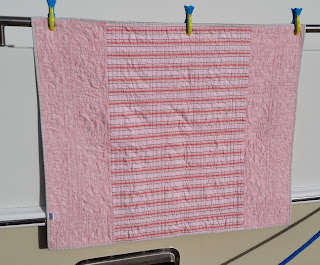 On the back I used several pink fabrics. I wanted to put more pink on the front, but it didn't work quite right with the animal prints. 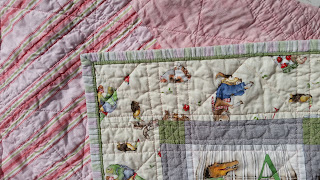 The border is another fabric from the same line, featuring a number of the hungry animals. I stitched a flanged binding with the sage green and a matching stripe. The quilting is straight lines that echo the blocks and diagonals across the middle of each block.


Charis said she ripped open the box as soon as it arrived because she knew what must be inside. That makes a quilting auntie very happy!
Posted by Louise at 2:37 PM