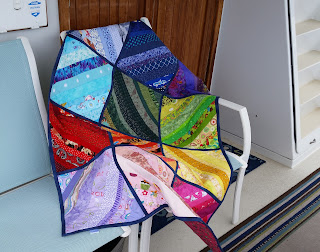 This week, I stitched up this little Quilt As You Go sampler piece. The blocks are 12" square so it finishes 36"x48". This size is requested by the group Quilted Embrace, which gives wheelchair quilts to folks in nursing homes, so that's probably where it will end up. 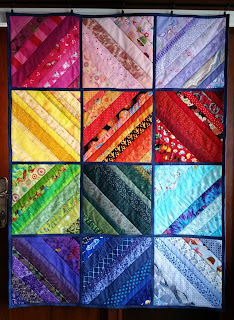 The strings were sewn one at a time directly onto both batting and a backing piece. I tried to include at least one fun novelty print in each color, so there are chickens, chiles, cupcakes, basketballs, dogs, trumpets, flames, fishbones, race cars, seahorses, snakes, horseshoes, asparagus, bicycles, butterflies and hot air balloons. I hope that will amuse the recipient. 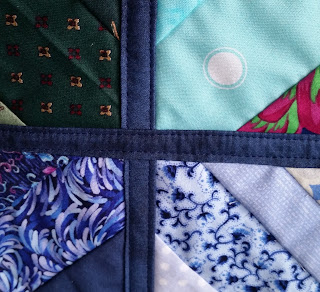 I followed Fiona's tutorial to join the blocks together. Her method has no hand stitching, which is exactly what I wanted. She wisely used black sashing on her piece and it convinced me to stay with a dark, solid color instead of the black and white stripe that was in the back of my mind. This photo shows the machine stitching that attaches the sashing in the front. Navy blue thread on navy fabric disappears nicely into the background and hides the wibbles and wobbles. For the backing pieces, I chose fat quarters in roughly the same color as the front so you can kinda sorta still see the rainbow effect. 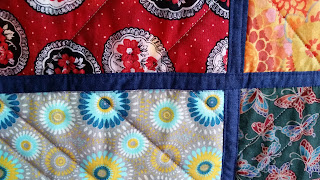 The actual quilting stitches show on the back, and I used the same neutral beige thread on all the backs. The sashing looks almost the same as the front. Because I sewed the sashing down from the front, I missed the back pieces by a hair in a few places. I used navy top and bobbin thread for the sashing, so the near misses show a bit on the lighter fabrics like this grey and teal medallion print. However, since it is just a line of blue thread closely paralleling the blue sashing, I decided to leave it. 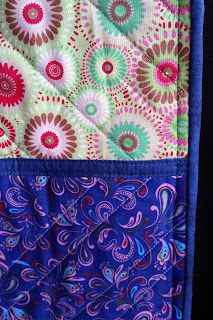 I also used the same navy blue for the binding, to make the whole piece look more like stained glass. My usual method of machine sewing the binding was fast, but in hindsight I should have switched back to the beige bobbin thread. The line of bobbin stitching always shows in this method and that doesn't bother me, but using the navy blue made it stand out more. Not too bad on the purple, but pretty obvious on the pink.

All in all, it was a fun, quick project. String blocks are so rewarding, and it was nice to have the quilting finished block by block. Attaching the sashing is fiddly and clearly I could use more practice to get it to line up more evenly. I don't know that I'll use this method very often, but it's nice to have it in my tool kit.

This is 1. beautiful and 2. inspirational! I've done small pieced projects, a bag here, a table cloth there, but never a quilt. This may well break that streak. Thank you!!

Great finish! I love this method of QAYG!

A perfect quilt full of colour, anyone in a wheelchair (or not) would love to have this covering their knees on a cold day.

It looks wonderful and perfect for its purpose! I've used that QAYG method once or twice and have really appreciated its value. It has its place! I so admire the work you do for others. You are the reason for many smiles!

I did one of the QAYG almost 2 decades ago, it was hard doing the sashing parts but I was pretty proud of it. I love that you did it with the fun bright string block for a great finish.

It looks great..... one day I'll look up other ways of sashing! I love the happy colours you have used...
Hugz

I've never been motivated to do a quilt as you go. But I like the idea of just cutting batting to the 12" or so size as it would help wipe out all the excess batting I have. I actually have a book by Lois Smith about doing quilt as you go where none of it is hand sewn. Used patterns out of the book but never that method. Those string blocks would be perfect for the Rainbow Scrap Challenge.

That's such a lovely bright quilt! The QAYG method is great - one step that I've found makes it easier is if you make your backing squares just a little bigger than needed, then trim back to one quarter inch (once you've quilted). These can then be stitched together without the need for sashing on the back. Makes it that bit easier. Wonderful quilt!