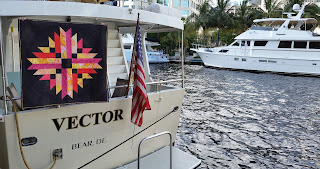 Bright Astrodelic is spiral quilted and bound. It's an explosion of hot colors! 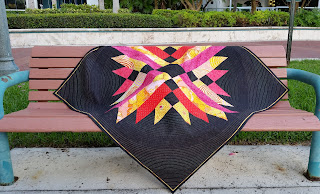 We are currently docked in downtown Fort Lauderdale and I was able to toss the quilt onto various objects for some photos. My "Kilroy Was Here" quilt holdin' husband was still asleep so I made do with benches and bushes. 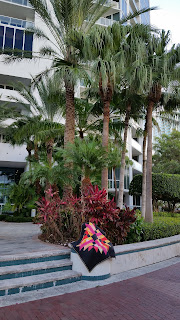 The red leaves on this plant are almost as bright as my fabrics. South Florida is not afraid of color, that's for sure. 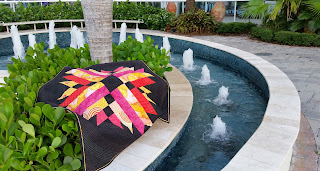 This nice fountain was only a few hundred feet from our boat. The downtown docks are on the New River. It was super busy last night with many, many boats returning from watching the 4th of July fireworks from downriver. The fireworks were shot over the beach, but we decided to just stay on board this year rather than fight the crowds. It was entertaining to watch the parade of boats as they jostled and bounced back up river around 10pm, while we calmly sipped ice cold beer.

The back of the quilt is a simple framed square. It looks solid black in this photo. 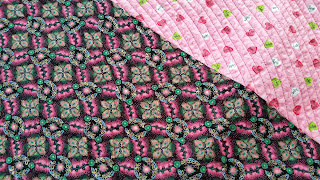 However, it's actually this rather busy print with gold metallic accents. The spiral quilting is completely invisible on the dark fabric, but you can see it easily on the sweet candy hearts outer border. 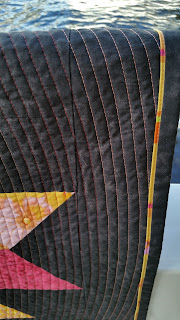 This close up shows the quilting on the front pretty well. I changed top thread color every seven go-rounds, using yellow, red, and orange threads. The spacing between spirals is about the width of my walking foot. The quilting took a loooooong time, but I'm pretty happy with it. I did a black and yellow flanged binding to give the edge sharp definition. The yellow flange actually has flecks of the pink, red and orange in it. Fun! 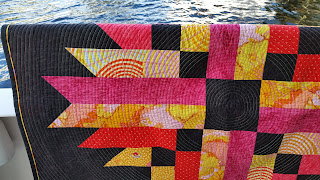 I started the center spiral with a circle about 4" in diameter using the walking foot. Then I used my FMQ foot to spiral back in to a smaller center. I knew it would be a bit wobbly, so I chose the red thread for the center, which is more forgiving against the black.

We'll see how it looks after washing. Right now, it's fairly stiff, but some of that comes from the black marbled background fabric. It was an off brand and full of sizing.

Today we leave on our final open ocean passage for a while. We'll be going straight from Fort Lauderdale, FL to Charleston, SC. Depending on how much of a boost we get from the Gulf Stream, that should take between 50 and 60 hours. I'm hoping we'll have internet for a couple of hours at the beginning and end of the trip, and calm seas in the middle so I can sew!
Posted by Louise at 10:57 AM