We've moved off the boat and into the RV; let the sewing begin! I've stitched up four small quilt tops, and even finished the smallest one. To be fair, they are all quite simple, but I'm feeling really productive here.

I'll warn you up front that the lighting is TERRIBLE in here, so the colors in my photos are really off. I'll try to take more pictures outside in the future. 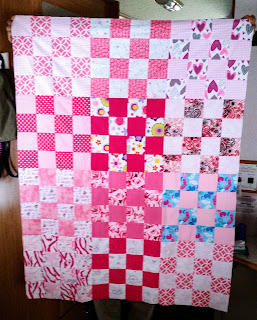 First up is this pink flannel 16 patch. After dabbling briefly with flannels, I decided that I don't have the space to store a decent stash of this bulkier material. So one of my RV goals was to use up the rest of my flannels. All these pinks came from someone else's scraps that I bought on eBay. The individual squares on this are 3" finished, so the entire piece is about 36" x 48", a good baby quilt size. 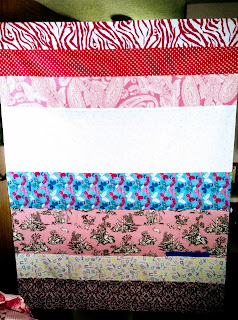 The backing is several of the wider scrap strips. The true colors of both the front and the back are mostly soft baby pinks with a few hot pink accents. 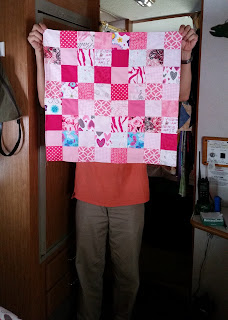 With the handful of leftover 3" squares, I pieced this doll quilt. Isn't it cute? I have no idea who to give this to, since I don't really know any kids who are at the baby doll loving stage. But it's small enough to tuck away until the right home comes along. This one is finished, pillowcase/envelope style with no batting inside. 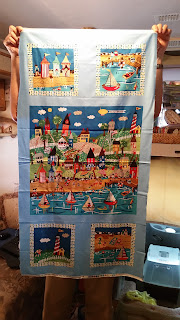 Next, I cut up the four panels from the "Good Seasons" line by Andover fabrics. Each panel depicts one season of the year, with a large central square and four smaller squares. This one is Summer, and has a beach/lake theme. I set aside the small squares for another project.

Each panel had a different background color, so I trimmed them down so that wouldn't show. Then I added a thin black border to three of them. Autumn already had a black background, but had been cut from the bolt poorly so I had to add more black to one edge. 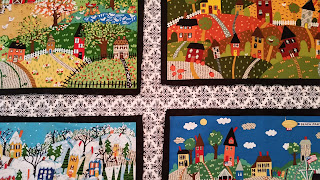 Then I auditioned several fabrics for the sashing, including a very safe and dull beige. This black and white pattern almost made the grade, but I decided it was just a bit too busy. 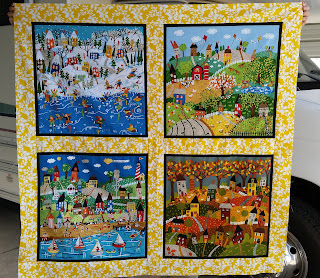 I ended up with this yellow and cream leaf pattern as sashing, since yellow and black were the only two colors that could be found in each of the four panels. The black edging really pops off that yellow! I wish the two blue panels could have ended up diagonally across from each other for balance, but there was no way to do that and have the seasons in order.

Right now the top is about 48" square, which is a little on the large size for a wheelchair quilt, but a good size for a kid's quilt. With another border or two, it could be a good couch quilt. I think this fabric works well for both kids and adults, so I'll set it aside as is until I know where it's going. I'll choose a backing later, too. 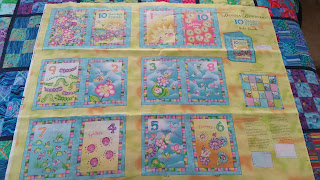 Today I whipped up quilt top number four, a little toddler quilt from a soft book panel. This photo shows the panel before cutting. You can see there are directions for sewing it into a book, but kids grow out of fabric books much sooner than blankets, so it will have a longer life as a quilt. 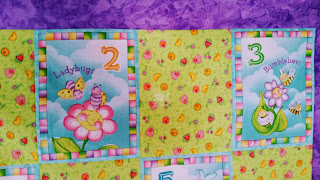 The book "pages" were already outlined in a little block pattern plus the light blue, so I just added alternating blocks of a lime green seersucker fruit print. I thought that went nicely with the panel's theme, "Garden Friends." The fruit fabric is really quite bright and my camera couldn't capture it's limey goodness at all. A fairly plain purple border wraps it all up neatly, and I'll probably use one of my larger pieces of flannel for the backing. 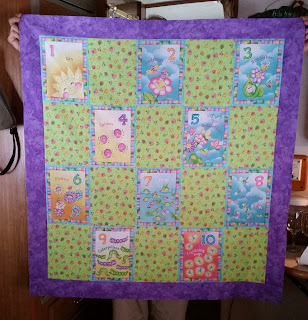 I found the panel on line, and could see that it was a fun, cute print. Smiling bugs, frogs and flowers! Unfortunately, it was printed on really thin cotton, so I'll need to quilt it fairly heavily to shore it up a bit. Unless I'm very familiar with the designer and manufacturer of a particular fabric, it's a bit of a crap shoot to buy online. I've gotten pieces that were printed poorly on gorgeous, high quality cotton and ones like this where everything was great except the underlying material.

And finally, there is a fifth project but alas, no photos. One of our regular blog readers, Tom, came by to meet us a couple days ago. Tom and his partner work at See's Candies and brought us two boxes! It was such a sweet thing for him to do, that I decided to make them two mug rugs using some fun chocolate themed fabric I have. I used the heart block pattern from Cluck Cluck Sew and they turned out super cute, if I do say so myself. I was a bit rushed to get them finished before Tom came for a second visit, so I forgot to take photos.

No photos of the See's box of Nuts and Chews, either, since that was eaten so fast it would make your head spin...
Posted by Louise at 3:00 PM

Wow - you HAVE been busy! I have 3 blue plaid flannel shirts to deconstruct and turn into a smallish soft quilt - not a fabric I typically keep in my stash.

well you have hit the ground running!!! haha.... I love flannel quilts and they are perfect for babies to snuggle in to... Great use of the book panels too...
Hugz

I'll bet that flannel quilt feels as awesome as it looks. You have managed to keep busy with sewing as you relocate a bit.

The Nuts and Chews go pretty fast in this household too.

You are super woman to get so much done while moving to another small space. My hats off to you. All the projects are cute! Glad I came by to see your work again!

You amaze me! Such cute uses of unusual fabrics. Your colors are right on. Love the lime green and purple.

Look how much you are getting done! Looking good!