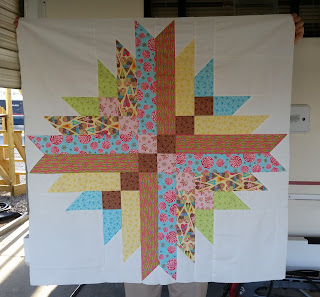 In October of 2014, I came across this pattern, called Astrodelic. It is a free download from Art Gallery Fabrics. At the time, it seemed way more difficult than my skills could handle, so I tucked it away in a folder.

I've looked at the pattern several times in the last two and a half years, yet it always intimidated me. I recently bought a fat quarter bundle of Multiple Blessings by Caroline Simas, and the colors are similar to the ones in the pattern example, so I read it over again. Hmm, this doesn't seem all that complicated. It's really just four big blocks, and there are only two color combos. The piecing went quickly and I finished the top in about five hours!

However, I'm not thrilled with the result. The fabrics are very pretty and the colors are sweet for a girly baby quilt, but I didn't pay enough attention to value. Several very similar fabrics are right next to each other, and the pale yellow almost disappears against the Kona snow background. The small brown diagonal squares work well, but the pink ones mush into everything else. I also put all the solid reading fabrics in one set of blocks, and all the more patterned ones in the other. 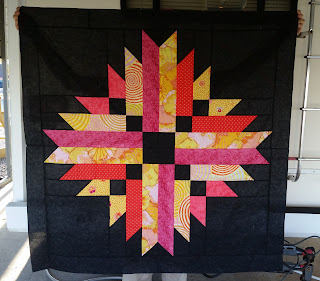 I decided to try again with a much bolder and higher contrast palette, and this is the result. You don't get much more contrast than between black and yellow! I wanted a hot, bright star, so I kept everything in the yellow, orange and hot pink range with some older Kaffe Fasset fabrics and a couple of blenders. The patterns in yellow alternate with the solids/blenders in orange and pink. I used black for the diagonal small squares, and added an outer border so the bright points really pop out of the black.

An unintended consequence of using the small black diagonals is that I ended up with a larger black central square instead of a crossing four patch. Oh well, I think it still looks pretty neat, and I'm happy with this one. All that negative space will be great for some FMQ practice, maybe even in some contrasting gold or pink thread. We'll see how brave I am at the quilting stage.

Astrodelic was a well-written and straight forward pattern, in spite of my newbie quilter jitters. The second top took me less than four hours. I'll probably make this pattern again and do some more color and value playing. How about a rainbow next time?

Email ThisBlogThis!Share to TwitterShare to FacebookShare to Pinterest
Labels: freebies