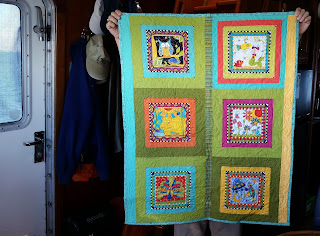 We're currently underway from Charleston to Jacksonville, and that's the lovely, flat calm Atlantic Ocean you can see peeking through the window above. I put the final touches on this odd little quilt last week, called Weirdly Whimsical. It was a bit of purge sewing to clear the funky panels and green linen out of my stash and will be sent to my Project Linus chapter in California.

Since it's so small, I decided it was a good quilt to try a few new things on. First is the mix of fabrics: linen and cotton. Then I tried some donated fabric as the backing. This woven plaid was given to me by Sean's aunt. It's a little thicker than quilting cotton so I wanted to make sure it wouldn't fight me during FMQ before I used it on a larger piece. 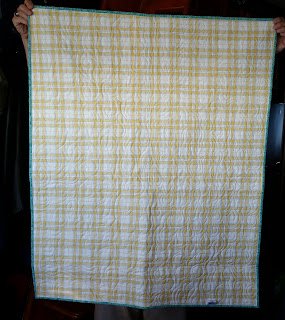 I'm happy to report that it quilted up nicely. It's very high quality stuff and the gender neutral color and geometric design are super versatile. All very good news, because I have over 15 yards of this yellow and a similar green! The downside of using a plaid as the backing is any crookedness is obvious but hey, it's the back. 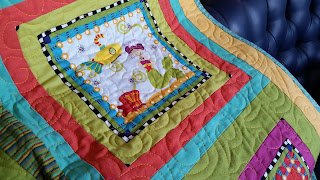 The next new-to-me technique I tried is the quilting design. I learned this from an Angela Walters video. She calls it "hook-swirl." It gives a nice texture while being easy to fit into corners and odd shapes. It took me a while to get the size and spacing consistent, but by the end of this piece it felt pretty natural. I'll definitely hook and swirl again. 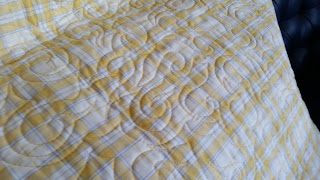 And finally, this is the first time I've used a 40 weight Aurifil thread for quilting. The bright yellow, color 2135, coordinates well with front and back so I used it both the top and bobbin threads. My Juki seemed to like it, and I'm happy with the look of the thicker thread. I got a smoking deal on 12 spools of 40 weight ($4.25 each!) and I've since used several other colors. The only downside so far is that less of it fits on a bobbin. 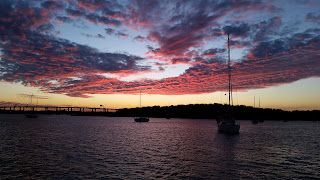 We've had a really nice stay in Charleston, and enjoyed many nights with sunsets like this. But it's time to move on to warmer waters, so we're heading south. It's an overnight run to Jacksonville, so I've got a yummy stew in the crockpot making the whole boat smell delicious. Sean is napping to prepare for his late night watch, and I'll take the early early morning shift. We'll probably lose internet connectivity soon, but the sea is so calm that perhaps I'll get some sewing in on this trip.

Linking up with Celtic Thistle's New To Me, since I tried a bunch of new things on this little quilt.
Posted by Louise at 2:01 PM

What a cute quilt for Project Linus. Glad the backing worked out for you. I love watching Angela Walters & looks like you've really caught on to the "hook-swirl" quilting design. BEAUTIFUL sunset picture!!

This looks great and I love the backing! Yours looks straight to me....mine would be quite crooked, lol. The quilting looks terrific too. But then I am partial to any type of swirl design.

Very sweet quilt. I have used Angela's hook swirl too and it's a lovely one. Happy sailing....
Hugz

Another cute quilt! How does the linen wash with the cotton? And does it wrinkle? Always remember “back in the day” how wrinkled linen got and how hard it was to iron. Love your swirls. Safe cruising. Looks like the Atlantic is nice and calm.

The ocean looks beautiful! I really like that fmq design you used.

So you prefer to travel at night? Because the water is calmer I suppose. So glad you tried the hook and swirl-it's so fun isn't it! Just remember to echo out if you need to get somewhere else.

I'll bet the linen give a nice drape to the cute quilt too. Have a safe trip to Jacksonville.

How pretty. I can only imagine. Great job on the hook and swirl!

Hi, Anonymous! (Claudia, is this you?) I haven't been able to wash this quilt yet, but I've heard that the linen gets really soft. I'm not worried about wrinkles since I love the crinkly quilt look. I have several WIPs with linen so I'll report back after I wash a few.

Congratulations!
That quilt will be perfect for a little one with the colors and
'magical' creatures.
Nice fmq too.
Does your boat have enough power to run your sewing machine?
Or do you plug in when you dock?

It is a whimsical quilt. I like the quilting that you chose to go with it.

What a great finish! I’ve found that linen and cotton are nice together, and get better with several washings. BTW, it was a wonderful thing you did to send Sue a quilt. My friend Nancy lost her home in the same fires and I think I’ll send her a quilt too.

Oh! That sunset! Overnight run… Sewing on the way with calm waters… Quite the idyllic life you lead my friend. And you put out such good in living your life, this Pornect Linus quilt just one more example. Glad that plaid worked out so very well! You need to tell me where you scored Aurifil for that price! I love that hook swirl design of Angela’s too; need to use it more so it becomes second nature. Yours looks terrific

So glad to hear that that thick fabric is going to work out great for quilt backs! Yay! Great job on the new quilt motif. I think I have that class and I haven't tried that yet. Good for you for going for it!

I will have to try this hook swirl. It looks great

Congratulations on all those successful New to You's and thanks for linking up to New to Me too!

Super cute, perky quilt. I am quilting a linen and cotton top for the first time right now. I thought I would have more trouble finding the right tension balance, but it seems to be just fine. It's a pretty fiber combo. -- I am really digging the idea that you just pull up anchor and head off to another place any time you like and you have your home with you. That is so COOL! Do you guys live in just one spot and go visiting, or do you roam as your heart wants and live in various places? Either way, what a nice setup.