It's RSC Saturday! I haven't posted any of my Rainbow Scrap Challenge blocks for a long time, but I make them each month. This year I've been trying to tame the string bins, so both blocks use strings. 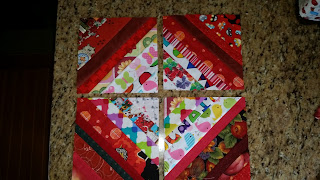 These classic string blocks are made on paper foundations cut to 8.5" squares. That makes good use of standard size 8.5"x11.5" paper from junk mail. I like using paper rather than fabric foundations because the blocks end up lighter. And tearing off the papers later is rather satisfying! 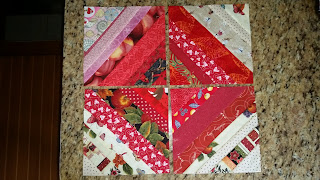 I'm starting my blocks with a dark strip down the center diagonal, then doing all darks on one side and all lights down the other. For most colors, the lights are a paler version of that color. But for red, I had already used most of my pink strings during the pink RSC month. So I chose to use white or cream scraps with bits of red in them. I'm making each color in groups of four so that I can do this diamond layout later. 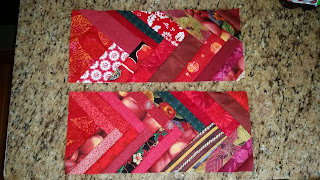 My second string block is made after the squares are finished. The remaining strings are cut into 7" lengths and sewn into wonky herringbones. Because the string widths vary, the point of the herringbone wobbles from side to side. When they get long enough, I trim the length to 17" and square up the width to 7.5". Why 17"? Because that's how long the first one ended up back in January! (What color was that? Early 2020 is a complete blur...)

Linking up with Angela at So Scrappy.

Email ThisBlogThis!Share to TwitterShare to FacebookShare to Pinterest
Labels: RSC2020