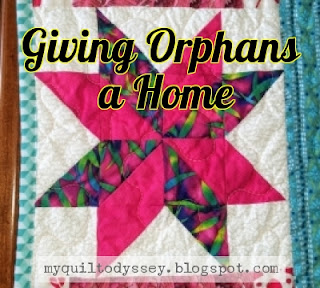 Welcome to part two of Giving Orphans a Home. Today I'm going to share a few techniques for dealing with a big batch of orphan blocks that are almost, but not quite, enough for a full quilt. 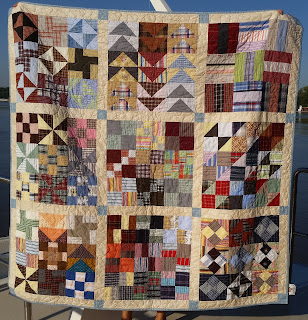 This is Grandpa's Plaid Shirts. When I saw all the blocks for this quilt together in a big ziplock baggie, I knew it was one of the first ones I would tackle. I just love all the soft plaids, flannels and homespuns! These nine blocks are each a nine patch of sub-blocks, and came to me in a combination of completed big blocks and a pile of sub-blocks. 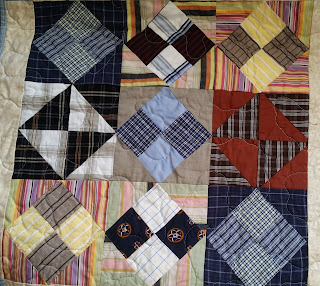 Here's one of the blocks that came to me completed: nine four patches set on point. If you look at the finished quilt, you can see there were also finished big blocks made up of all flying geese, all rail fence, and all whatever that block is in the far right of the middle row. (Anybody know the name of that one?)

Also in the baggie were a bunch of sub-blocks, but fewer than nine of each: windmills, pinwheels, broken dishes, four patches, nine patches, and more. I think the intent was for there to be 12 big blocks, each made of a single style sub-block, and someone gave up two-thirds of the way there. 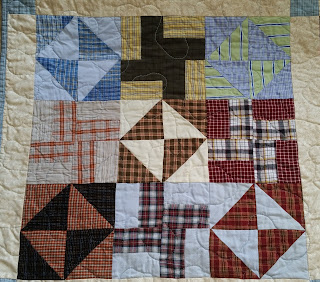 What to do? One option was to try to make more of each sub-block type until I had nine each of 12 types. But I have almost no plaids in my stash and wanted to get this quilt finished quickly. I decided the plaids were busy enough that no one would really notice if a big block was made of, say, four windmills and five broken dishes. So I started combining all the little pieces together, figuring as long as some symmetry was maintained, it would be JUST FINE. And you know what? It IS! It isn't as quite as big, but at 60"x60" is a good size for Covered in Love. And it's a finished quilt, ready to comfort a family rather than muttering and mumbling pieces in a ziplock baggie.

The cream sashing, which was a yardage donation to Covered in Love, plus some pale blue cornerstones, corrals each block into just enough scrappy plaid goodness, allowing me to use every single sub-block. I was short just one. A gold star if you can find the chunky churn dash in "close enough" fabrics! Edited to add: Since I wrote this post, I've learned that the plaid shirt blocks were made by Holly. Big thanks to Holly for making such fun pieces and donating them to Covered in Love! 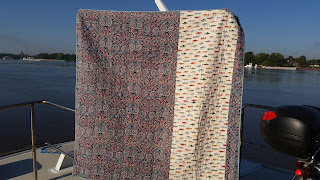 And because this is the first time the quilt has been documented on my blog, here are a few more details. I quilted it with a simple loose stipple and bound it in the same light blue plaid as the cornerstones. 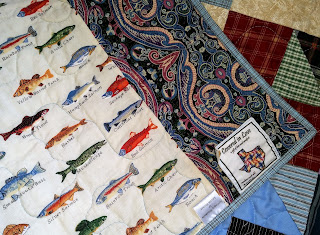 The back is a combination of a pretty blue swirly paisley that was donated to Covered in Love, and a panel chock full of fish. I thought that might appeal to the kind of guy who wore plaid shirts. The fish fabric was given to me by Cynthia of Quilting is More Fun than Housework. 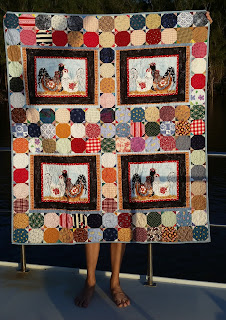 Next up is Snowballs and Chicken Panels. Those are my DH's chicken feet underneath. This one is an example of how to use a panel or two (or four!) to fatten up a group of blocks that aren't enough for an entire quilt.

Approximately 120 finished snowball blocks were donated to CiL. Each one was either a dark center with light corners, or a light center with dark corners. They were beautifully made, very evenly sized and all the corners were properly pressed to the dark fabric. I knew stitching them together would go so smoothly! In addition, a big batch of centers and precut corner triangles were donated. For a brief moment, I considered finishing up the rest of the snowballs. Then I sat down and had a cool beverage until that thought went away. I KNEW my snowballs wouldn't be as precise and it just sounded....tedious. Surely 120 was enough for an entire quilt? That's so many blocks! But at 4.5" finished block size, it wasn't going to be enough for a CiL quilt. 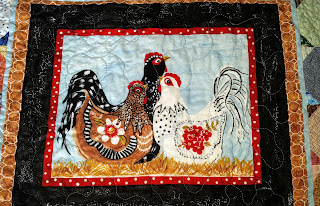 Chickens to the rescue! This panel is called Three French Hens, and it has the same sort of old-fashioned, farm house vibe of the scrappy snowball fabrics. By using a combination of trimming the panels and adding skinny borders in light blue, I made them equal to five snowballs in width, and three in height. This allowed me to use all the premade snowballs plus only a handful more of my own. 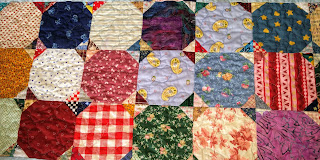 And as I predicted, those snowballs were super easy to sew into rows and columns. I do love the way the center section looks with the alternating dark and light blocks, and maybe someday I'll make an entire quilt of this style. But for today, they are playing with chickens and hopefully bringing a little comfort. 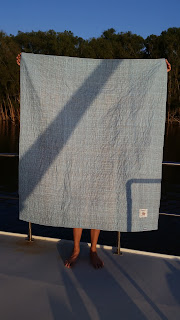 The back and binding on this one used up the last of the blue plaid from Grandpa's Plaid Shirts. Once I start cutting up yardage, I'm often motivated to just use it up completely. Does that happen to you?

So the plaid blocks became a complete quilt by combining them differently and reducing the size from the original design. And the snowballs got plumped up with some fun panels. Another option that always works is to add simple borders. If there had been a few more snowballs, I might have just added a few rounds of coordinating blenders as inner borders and a nice floral outer border.

Adding top and bottom rows of different blocks can also stretch a set of "not quite enough" blocks. For a great example of this, check out Cathy's bright, happy flimsy here.

Have you used any of these techniques to stretch some orphan blocks? Let me know in the comments!

The next installment of Giving Orphans a Home will explore some medallion style options. And if you missed it, here's the introduction of this series.
Posted by Louise at 12:42 PM