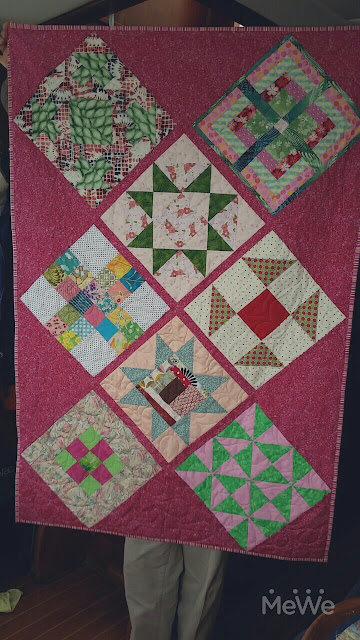 My latest finish is made almost completely by other people. All these 12" finished blocks were stitched by members of the Sunshine Online Quilt Guild. The lotto blocks for the month of July were pink and green, and I won the lotto!  A big stack of pink and green goodness arrived with our next batch of mail in August.

The idea of setting them on point entered my brain and wouldn't leave. I picked out eight that looked nice at an angle and played well together, adding some hot pink sashing and setting triangles. Zip zoom, the top was finished. 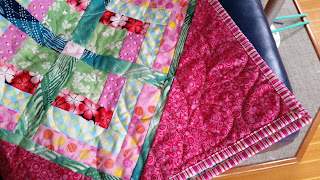 This photo shows the colors much better, bright and saturated. And that block is one of my favorites! Finishing at 36"x52" this one struck me as a good candidate for a wheelchair quilt. 36" is a nice width so the quilt doesn't get caught in the wheels. I put a green and off white plaid on the back and quilted it up with floppy feathers in pink thread. A stripey binding finishes it off. 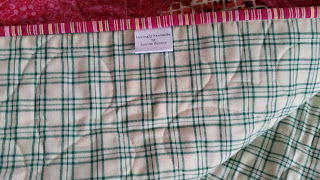 Because of the labeling requirements of various charities, I try to decide where a piece is going before I quilt it. For instance, both Wrap A Smile and Quilts Beyond Borders want labels with their names on them sewn onto the back. That's much easier to do before quilting. My own personal labels have machine wash and dry instructions on the back, so I don't use those on quilts going to other countries. My labels get sewn into the binding, like this.

The last few days we've been skedaddling south and in the open ocean off the shore of New Jersey. Unlike our trip north, the weather has been only OK, not great. The seas are rough enough that sewing is quite difficult, which hasn't stopped me from trying! After I fell off my sewing stool, though, I decided to just stick with a bit of fabric petting and organizing. And no, I didn't hurt my body, but my pride got a bit bruised. Nothing like finding yourself on your butt, wedged under your sewing machine, for tasting a little humble pie. Mmmmm, pie. 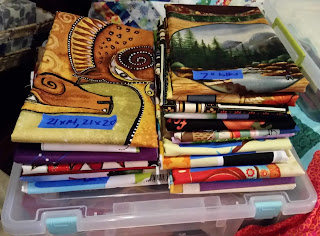 All my panels had been hanging in my clothes closet but were a bit "out of sight, out of mind." So I opened each one up, measured the size of the subpanels, folded them consistently, and labeled them. It was fun to remind myself what I have...lots of really cute stuff! I was also surprised to see that they take up less room folded like this than they did on the hangers. 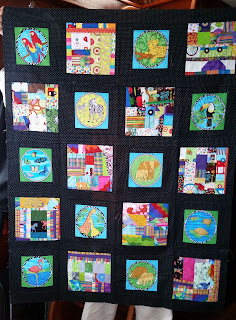 And speaking of panels, while we were still at anchor in quiet waters, I put together this little top using some bright jungle animal panels. There weren't enough of them to fill out the entire quilt, so I augmented them with crumb blocks. 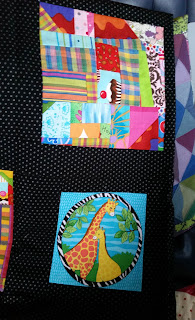 For the non-quilty readers, crumb blocks are made with really small scraps sewn together willy-nilly then trimmed into neat squares. It's fun to see glimpses of things like cupcakes in the scraps. The crumbs were already trimmed larger than the animals, so I used the black polka dot sashing to make everything neat and tidy. This one is the next to be quilted, once we're back in calm seas!

First, your Lotto quilt turned out lovely! I won the Block Lotto in August and am awaiting the last of the blocks to arrive this week in order to put a cute quilt together. On the donation quilts for Wrap a Smile (etc), where they require their labels, do they add them after you send the quilts? or do they send you some labels to use? Looking forward to seeing the finished animals quilt!!

I love seeing what you pull together from your stash! The jungle prints with crumb blocks are super fun. Love the on-point setting for the lotto blocks. On point can really add some oomph to a quilt!

Oh no! Falling off your sewing chair sounds like the sea was quite a bit rougher than I could handle. Kudos to you for trying to sew anyway! Setting your blocks on point was a great thought. I am working on my first on-point quilt right now. I've got most of the blocks done, now to start sewing them together! We'll see how it goes.

Well I'm pleased to see that your 'fall' didn't stop you doing these 2 quilts. Great idea to use the crumbs with other blocks - possibly another idea I'll compliment you by imitating! Hope the seas are far calmer for you but also pleased that you had time to reassess supplies.

Your imagination knows no boundaries! These are just delightful! I’d have wanted pie after a fall like that! Glad you weren’t injured. Stay safe while navigating the waters this time of year.

Well they say you learn something new each day and reading your post I did. I have never heard of "Crumb Blocks" and thank you for explaining it. I have been quilting since 2010 and this is the first time I have come across this term and I think it is a great idea to finish off a quilt that you don't have enough of the main fabric for and would no doubt be great for an I-Spy quilt too. I hope you get some calmer waters soon. Love all the quilts.

Yes I can imagine feeling a bit humble after falling off the stool, that's a time when we are glad we are sewing alone!! Glad you didn't get hurt. I was wondering how you guys would do through this storm system, it's a nasty one. Great creativity was flowing all around you once again with these two newest quilts, always love seeing what you are doing!

What fun creative projects you've been working on. Those lotto blocks will make a lovely wheelchair quilt for someone, what a grand idea! That panel quilt with the crumb blocks is cute too. Okay, I have to admit I giggled just a bit when I read that you fell off your chair. I'm sure glad you weren't injured, but you are probably the only quilter I know who would have a good reason for falling off her chair! I'm not sure I'd be able to quilt in rough waters, but I thoroughly enjoy experiencing it through your posts!

Love the bright jungle panel combined with the crumb blocks, they make a lovely quilt top. I’m glad it was ‘just’ your pride that was hurt in the fall, take more water with it next time! Hehe 😂

I couldn't even imagine trying to quilt or cut on rough waters. Although that could make for interesting quilting motifs :) I have to say you hit the jackpot because those blocks. They went together quite nicely to make the wheel chair quilt.

You seem to have the cutest, most colorful fabrics of anyone I know. Even your crumb blocks are bright and cheerful. Hope you have smoother sailing this month. In fact, we all need a spell of calm weather. Enjoy this “fall”!

Hey, the crumb blocks were perfect with the animal panels, and I even love that they're different sizes - it adds a very nice spark to the quilt, and the sashing seems to have made it quite easy to work with the two sets.

I never even thought of the logistics of sewing in rough seas. I'm glad you didn't get hurt. I can just picture it! =8O

So you're blaming it on the rocky waves for falling off your chair, are we? wink. I guess I can believe you since Florence is creating some big waves and I pray for your safety. Even without the weather conditions, I am amazed at the wonderful quilts you make, rocky or smooth sailings. Zip Zoom, love the phrase, I may have to borrow this one. wink again.

Congrats to you in winning the lotto blocks! I love quilts on point & yours will make a great wheelchair quilt. Sounds like you need a seat belt on that stool! The animal panel quilt is fantastic. I don't know that I've ever heard of crumb blocks before either. It was a fantastic idea to use them as filler blocks in the quilt.

Love what you did with the lotto blocks. The hot pink is really so much fun. I would feel like you if I tumbled off the sewing stool. Fun to see the crumb blocks mixed with the other blocks.

Cute quilts! Great way to use your down time--organizing/measuring future quilts! Can you show the back side of your labels? And share where you got them? Thanks!

I'm amazed at how you whip up all these quilts so fast. The lotto blocks look great and the animals are fun. I wish you calm seas and fine weather :)

Both of your projects look great, Louise! I really like the way you added the crumb blocks to the panel pieces. So sorry to hear you took a tumble due to rough seas - that's definitely a quilting hazard most of us don't have to deal with! Hope you can laugh about it now!

Sorry you are having to deal with rough seas, but it sounds like you made the best of it. Both quilts turned out beautifully. I never know how to use crumb blocks, pairing yours up with those panels worked really well. Hope you see smoothing sailing soon.

You definitely have a wonderful stash to pull from. I like both fun quilts. Sorry about the fall — I might suggest high seas if I ever fall off my chair at the sewing machine!

Oh, my, I never thought about that occupational hazard on the high seas. I mean, I have thought about sliding or falling objects, but not getting jostled off your stool. Yikes! I’m glad you’re ok. It looks like you have some real gems in that stack of panels. And pairing crumbs with panel parts looks like fun. Did you make the crumb blocks specifically for this quilt or another time (and do you ever make them as leaders/enders)?

Goodness , just as well you weren't using scissors when you fell off the stool . I hope the rough seas have settled . I love the Backing in this . I used s green check as a border in the first double bed quilt I made . I regretted not using it as s backing too

Congratulations! Love your lotto block quilt, wonderful colours. And the panel quilt with the crumb blocks, very fun. For someone having a problem sitting at the sewing machine you sure get a lot done!

Thanks for sharing all these lovely, very colorful blocks ! They all go together so well and a real day brighteners. We especially love the pink and light green ones -- a wonderful combination. Take care, and have a good journey to California. -- Marina and Daryl Lynn

Falling off a stool sounds like a normal day to me. I won't go into detail (not enough space here for that - lol) let's just say I'm a klutz. Love the way you added the crumb blocks to the panel blocks. It's very cool. (Take care of that busted booty!)

I like the Lotto blocks set on point Louise! I wouldn't like to tackle my sewing in rough seas, good job no major damage after the fall from the stool.