Greetings from the beautiful islands of the Turks and Caicos! We are docked in a marina in the city of Providentiales. The marina is nothing special, the docks are pretty beat up from various hurricanes, but it makes a great base to explore this island. 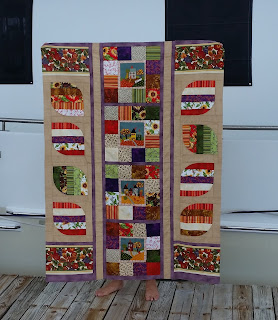 Since we arrived, I've managed to finish two more tops for the Hands2Help charity Victoria's Quilts. This one went together very quickly because the leaf blocks were already hanging out in the block orphanage. The center section is four small autumn themed house panels, which I surrounded with a charm pack that matched the leaf blocks. A few dusky purple sashing pieces and some larger chunks of apple fabric in all the same colors, and it was done. 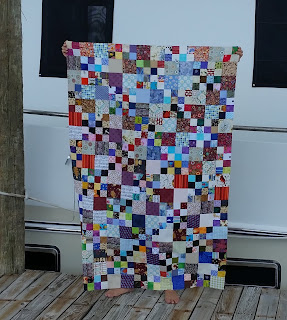 This double four patch top has been my leaders/enders project for over a year. When I started stitching together pairs of 2.5" squares, I decided to do no color matching at all. I just sorted the squares roughly into darks and lights and paired them up in that way. Same thing when sewing together 2-patches into 4-patches, and again when adding in the larger squares: ignore the color, look only at value. The stacks of blocks finally got tall enough for me to count them and see I was pretty close to having enough for Victoria's preferred size (approximately 50"x70".) A few concentrated hours to make the final blocks and I was ready to make the top. 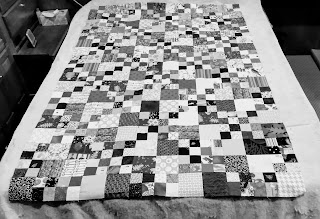 I'll admit that it totally looked like scrap vomit in the block stage. I was pretty discouraged because all I could see was ugly color combos. There was some agonizing until I used my phone's black and white filter to look at the top. Hey, the dark and light diagonals show up pretty well! At least it has some structure. 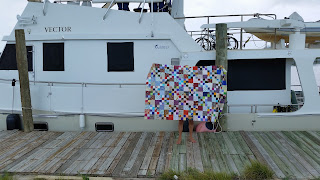 And when I stepped back to take this photo, I thought, wow, this value thing really does work. All those icky browns and strange purples mixed with lime green and bright orange turned into a classic scrap quilt. Actually, before that I thought, "Um, it's sideways."And, "I wish the sun was out." But around here, you take photos in the two minutes that the wind isn't blowing, no matter how bad the lighting or sideways the quilt. 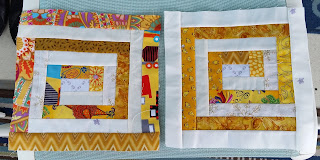 I also finished my yellow spiral blocks for this month's RSC. I took to heart several comments that encouraged me to use dark golds to get the contrast necessary for the spiral shape to show. I'm happy with these! 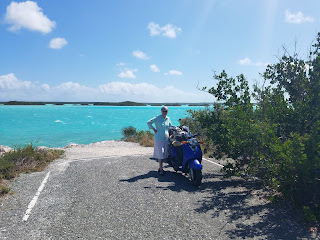 I'll leave you with this photo of a local road that ends in Chalk Sound. That's me standing next to my little scooter, Allegro, squinting into the strong sun and wearing a shirt the exact same color as the water. We unloaded the scooters for the first time in a foreign country and I drove on the left side of the road for the first time in my life. All the intersections are roundabouts, which twisted my brain up a bit initially. It's an adventure! We were a bit nervous about the legality of using our own bikes here, but the Customs official didn't seem to think it was a big deal, and the police car that passed us didn't give us a second look even with our Florida license plates.