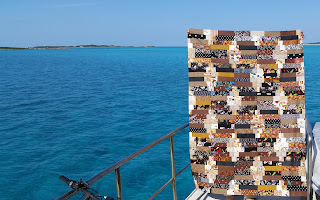 Today I finished this quilt top made completely of 2.5" wide scraps from my "dark neutrals" and "light but darker than off white neutrals" bins. I've been wanting to make a black and white quilt, but didn't have enough black scraps. So I added brown. The pattern is Myra's Jelly Roll Waves, which I won for participating in the Splash of Color QAL. It measures 50"x70". 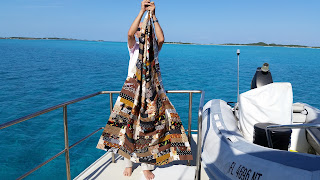 When Sean saw the top, his first response was the UPS slogan, "What can Brown do for you?" So that's what I named it. If you click over to Myra's site, you'll see the "waves" in most of the photos are bright colors against a contrasting neutral. That's what appealed to me about the pattern. In my mind, this quilt was going to look like dark ribbons of chocolate against cream. But the high contrast isn't there, and I was originally kind of disappointed in that. However, it has really grown on me. 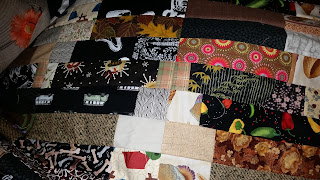 There are tons of really fun scraps in this top, from old fashioned telephones to camping tents to snowmen to chili peppers to leaves and dog bones. The mix of browns and blacks and the softer contrast with the tan/taupe/gray background pieces gives it a more homey, old fashioned feeling. 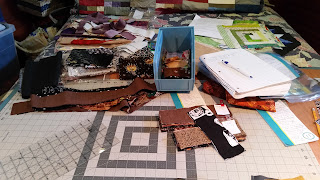 I made it specifically to donate to Victoria's Quilts as part of Hands2Help. Victoria's provides quilts to people in Canada who are living with cancer, and they've asked for tops only, not completed quilts. I think this top has a nice, masculine and almost woodsy vibe that could provide warmth and comfort to a man who is ill. Maybe he'll enjoy finding the little hidden images in all my scraps. 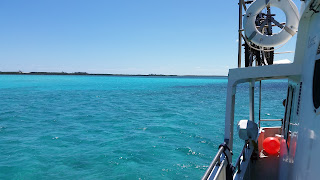 I started piecing WCBDFY? when we were still in the Berry Islands and the water was this gorgeous turquoise. The water is this color when it is shallow, around 15-20 feet deep. 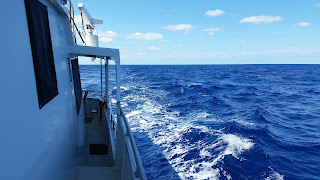 When the water is this lovely clear blue it means it is deeper. Much deeper. Yesterday we crossed over depths of 10,000 feet, almost 2 miles straight down. It was a little rough so I didn't sew until we made it all the way into Nassau harbor. Today we were back in turquoise waters, flat calm and lovely. I was able to finish the top while we were underway. While I love looking at the water, 6 hours of chugging away at 6mph leaves plenty of time to nip down to the studio for 10 minute sewing bursts. Enough little bursts and many seams are sewn. 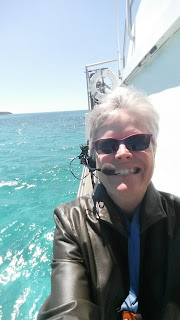 For those of you who asked if I was able to put my sewing machine on the back deck to sew, the answer is not yet due to wind! I tried to capture the wind in my hair in this photo. That thing on my ear is my hands-free microphone headset for communicating with the captain while out on deck. I raise and lower the anchor on the foredeck while Sean maneuvers the boat from inside the pilot house. We learned early on that electronic doohickey communicators are real marriage savers! No yelling with these puppies, just conversation at normal volume levels. One of our training captains told us that you can use hand signals, too, but most couples still manage to yell at each other using only their hands and proceeded to pantomime an argument about where to anchor that ended with a flurry of hilarious gestures that left me in tears of laughter.
Posted by Louise at 8:52 PM