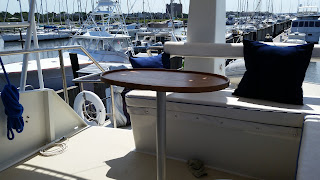 Yesterday I tackled a couple of small canvas jobs for the boat. I dislike this type of sewing, but it's my responsibility so it was time to suck it up, Buttercup, and get it done. This little table is made of teak and has a lip all the way around it to keep your wine glass from sliding off. Unfortunately, that lip also collects rain water, so the table needs a waterproof cover. 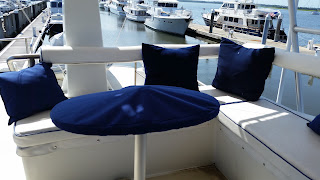 I made one four years ago from a pretty floral fabric that was supposed to be weatherproof, but it faded badly. Then I made a quickie cover out of a vinyl tablecloth, which disintegrated in less than a year. So I finally did what I should have done in the beginning, which is make a cover from Sunbrella, which wears like iron. It's also like sewing cardboard, but it's finished now and looks nice so I'll stop whining (maybe.) 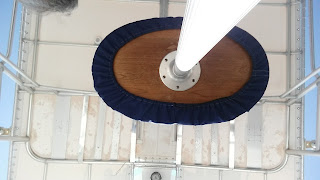 The bottom is elasticized with bungee cord for easy removal. 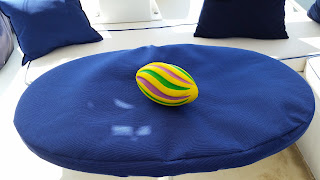 You may notice that the top isn't flat. That's because even Sunbrella will eventually soak up water if it puddles for several days. So we stuff this Nerf football underneath to peak the center of the cover up. Then the rain rolls right off!

In the background of the top photo, you can see several blue Sunbrella pillows. The first two I made using regular cotton thread, which degrades in the bright sunlight. I have since started using UV stable thread, which is thick and waxy, like dental floss. Eventually, one of the ties that holds the pillow to the railing fell off, and I stitched that back on yesterday since I had the UV thread loaded in the machine for the table cover. 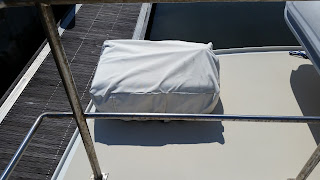 I also did a repair of our life raft cover. The life raft in its container is about the size of a suitcase, and sits on the back port side corner of the upper deck, hoping to never be used. To extend the life of the fiberglass case, I made this simple, boxy Sunbrella cover about three years ago. There is a rather sharp piece of the raft that sticks up underneath on one end, and it rubs against the cover when the wind is really blowing and flapping things around. 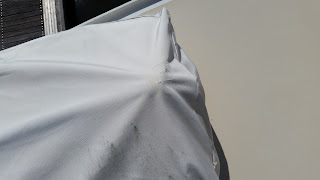 That rubbing eventually caused a small tear, which I repaired with an iron-on patch from underneath. However, it still didn't seem quite secure enough, so I also ran a line of UV stable stitching around it. The tear still shows, but that doesn't bother me much. No one is closely examining the life raft cover! I also decided the minor amount of mildew on the cover was acceptable for the same reason. I'd rather see a bit of black or green gunk than remove the waterproof coating with harsh cleaning chemicals.

After wrassling with thick, waxy UV thread and bulky, stiff and dirty Sunbrella, I'm looking forward to slipping some nice Aurifil into my bobbin and getting back to quilting on cotton!
Posted by Louise at 11:24 AM

I despise repair-related stitching projects too -- congrats for getting your to-do items taken care of!

Well done with the sucking up Buttercup! All looks good and hopefully you can forget about those jobs for a few more years now...
Hugz

Congrats on getting those projects done! Non-quilt sewing is so not fun. I love how you have such well-thought-out projects on the boat, though. The nerf football is genius.

That's one of those projects that has to percolate, and then you wake up one morning and say, "okay, today's the day!" Well done!

Done and done is what I say! Now you can move on to those fun projects. Good for you, tackling the necessary stuff!

Mending is my least favorite sewing! Glad you got it behind you. I like the nerf idea. I'll have to remember that for the patio tables, but I'll need to keep them hidden from the grandkids.

Right everyone thinks cause we sew....we mend! LOL!! My husband has a pair of shorts that have been waiting a YEAR for a button to be sewn back on! Baaahahaaa....oh man I am terrible huh! He LOVES to tease me about it. BTW: Good job friend...your covers look amazing!

Sometimes you got to do what you got to do, and didn't you do it well. The new table cover will last for ages, and I did laugh at your ingenious method of stopping the rain from puddling, clever.

I had to suck it up and get some mending done last week. It had waited long enough! Things like that can't be put off forever, can they? Ugh!