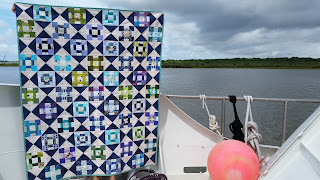 My version of the Chunky Churn Dash pattern is a finish. Gulf Coast Churn Dash was started back in January, when the Rainbow Scrap Challenge color was purple. After sewing up as many purple blocks as my scraps allowed, I immediately moved on to blue, aqua, and green blocks. 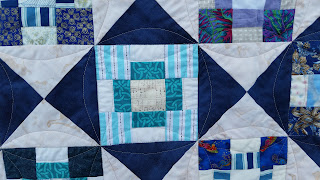 I guess I'm not patient enough to wait until a new color is announced each month! This aqua block shows the quilting, a free style overlapping circles motif. It's not free motion, though; I used the walking foot. But without any markings and just eyeballing it, the curves are a bit wonky and don't intersect into perfect circles. I'm OK with that. I started by stitching in the ditch because I thought I'd do a more elaborate design in each block, but this simpler pattern won out so it wouldn't compete with the busy, scrappy fabrics. The SITD was totally unnecessary, sigh. 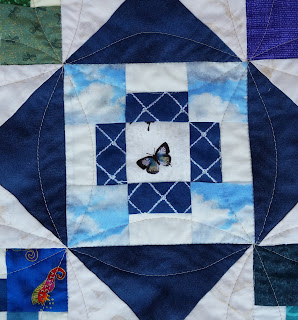 This block is one of my favorites, with the fussy cut butterfly flitting through the cloudy sky fabric. It's a peaceful little scene, and I hope it gives some comfort to the recipient. This quilt is going to be donated to Covered in Love and will be given to a terminal hospital patient to brighten their last few hours or days. 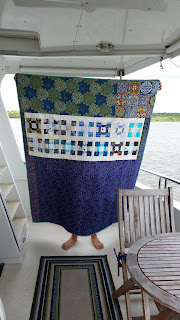 The backing is quite scrappy, too, using several orphaned blue/green/purple fabrics. All the remaining chunky churns are here, too. I had no preconceived idea of how large this quilt would be when I started sewing the blocks and ended up with extras. This photo also shows gratuitous husband feet and knuckles. 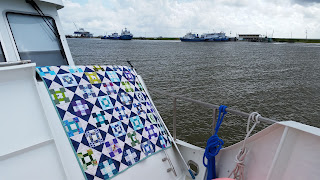 Here's a boaty glamour shot, showing our anchorage this morning near Cameron, LA. You can see a couple of the tools of the boatswain's trade, which is my primary role on the boat. One of my three boat poles is holding down the far edge of the quilt against the breeze, my beautiful (but disappointingly low quality) blue line is hung from the rail, and you can see just a sliver of my lurid orange ball fender. Those beefy, commercial boats in the background service the oil platforms out in the Gulf of Mexico, and are built to handle very rough waters. 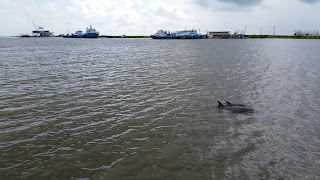 Here in a bend in the Calcasieu River, though, it's calm and peaceful. And, apparently, full of shrimp. As we were taking quilt photos, we heard the unmistakable sound of dolphins exhaling at the surface as they were feasting. Boosh! Boosh! At least four were feeding within 100 feet of the boat and I managed to snap one decent shot. They only surface for a second, and then reappear a random distance and direction away, so it's tricky to capture them. I love it when dolphins visit us; they are so graceful and sleek.

Gulf Coast Churn Dash still needs a trip through the washer and dryer, and I might ask Kat to do that depending on the timing of our next marina visit.

Linking up with Cathy's Butterfly and Kaleidoscope  and Kat's Sew Some Love linkies this week.