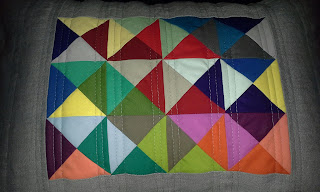 Well, it's been quite an exciting couple of days aboard Vector (that's the boat's name, if you're new around here.) Yesterday morning a different bilge alarm went off, this one underneath the bed in the quilting studio. These alarms detect water where it shouldn't be: inside the boat. You may recall that the one that went off late last week was an overflowing shower sump pump. No big deal, since shower water already lives in the boat, so if it ends up in the bilge it won't sink us.

The alarm that screamed yesterday was potentially much worse: a leaky washdown pump hose. The washdown pump is for rinsing mud and other icky stuff off the anchor, and it uses raw water (the water the boat sits in: the ocean, the river, etc.) The pump lives deep in the bilge under the bed with a hose that then snakes up to the deck. If something goes wrong with one of the many pumps that bring raw water into the boat, now we're talking about bringing outside water in and that can get ugly. Fortunately, the hose was only leaking a little bit and the pump is only on briefly while we raise or lower the anchor.

But until we knew for certain what was going on, we had to get eyeballs on the bilge under the bed. That involves pushing back the mattress and opening a hatch. My husband fixed the hose pretty quickly, but the gallon or so of raw water had to be removed from the bilge and then the whole area needed to be dried out. You really don't want a puddle of stinky river water stagnating under your guest bed. So the hatch remained open all day with a fan blowing to dry things out, and the quilting studio was completely unusable until late this afternoon. It's chilly and damp, so things dry out very slowly. I didn't think to take photos of the whole messy process, but I doubt anyone is overly disappointed in that.

That wasn't a big deal yesterday, since we were cruising down the river and enjoying the view. But today the weather was too nasty to move, so we remained in the same anchorage all day. We had very heavy rain and wind gusts of over 50mph. Even the professional tug boat captains were pulling over to the banks to ride this one out. The boat was rockin' and rollin' but I still could have done a bit of sewing if the room was available. I can pet and iron fabric in even the heaviest weather. Instead, I spent the day surfing my Instagram and Pinterest feeds, which are full of gorgeous quilts. Sigh. I found a nice neutral fabric bundle on eBay to buy, but 'tis better to sew than spend!

If you have a fantasy about boat life that involves endless cocktails while floating in warm turquoise waters, let me tell you that leaking hoses, loud alarms, huge autumn storms and frustrating days without quilting are here to bring you back to reality. 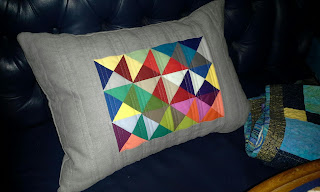 I finally convinced Sean that the bilge was dry enough and that we could put the room back together around 3pm. I was able to finish this little pillow cover that I had started last week. It has simple straight line quilting for a clean, modern look. It's a very satisfying finish, since it used up four random items that needed a good home: a mini charm pack, the last of some weird holiday fabric (for the quilt backing inside), two small pieces of fusible batting, and a bit of grey 100% linen. 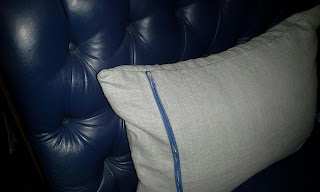 Oh, wait! Five things: I also reused an old zipper salvaged from another pillow. My zipper installations aren't first rate, but they get the job done. And now my happy little pillow will live in the pilot house where it will get used as a lumbar support every day. 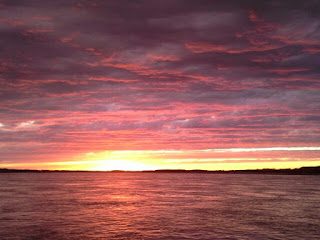 And then, just as forecast, the storm was completely over right at sunset. Red sky at night, sailor's delight. I just cracked open my favorite beer, Sean fired up the grill and is cooking bratwurst for dinner, and a pumpkin pie is thawing out for dessert. I guess boat life isn't so bad after all. Cross your fingers for a bilge-alarm-free week!