Goodies in the mail 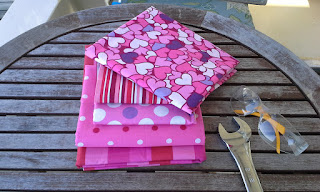 It's been fairly busy here on Vector. Sean has been going great guns on boat projects: those are his wrench and safety glasses in the photo. I actually finished a quilt yesterday, but I'm still writing up the post for that. In the meantime, here are some of the fun things that arrived General Delivery here in Chattanooga. This bundle of five pink, red and purple fabrics are actually from four different lines but the colors coordinate perfectly. I bought them from a single eBay seller, so I'm guessing she handpicked them for a particular project that was never finished. I think the top heart fabric will make a great focal point for a fun, girly quilt. 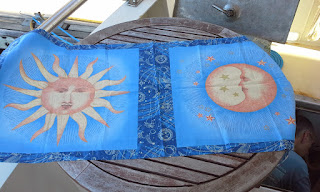 These two celestial panels are edged in metallic gold and rather pretty. I have several other blue and gold pieces with star motifs to add to them for a nice quilt for an older child or teen. Lots of room for free motion quilting on that plain paler blue background. I might try some metallic thread for that! 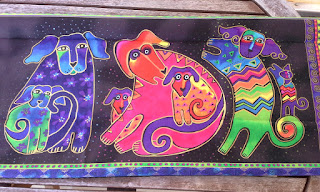 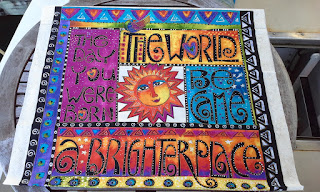 These two Laurel Burch panels also have nice metallic accenting. Ms. Burch's work was always bright and quirky; I'm sorry that we lost such a talented artist. I watch for her fabrics and snap them up when I find reasonable prices. The bottom piece will be perfect for a newborn baby quilt, and I have secret plans for the top piece. I'll just hint that those dogs will be taking a big trip to the southern hemisphere! 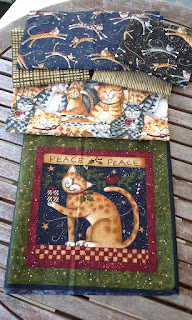 Isn't this a fun group of cat fabrics? I had a bit of the top piece with the navy blue background and used it in my first Christmas quilt back in 2014. I never saw that design again, and figured it was long out of print. With no designer name or fabric line information, I had no way to search for it, either. But just last week I stumbled on this batch of six of the coordinating pieces and I'm so happy! The line is called "Purrfect Christmas" by Susan Winget for Benartex. There are six different scenes in the large panel, with Peace, Love, Joy and cats leaping through starry skies. I just love the squinty, happy kitty faces. This batch looks like it was leftover from someone else's quilt, but the pieces are large enough to be useful. I should be able to fill in the gaps with some nice red, navy and green blenders. 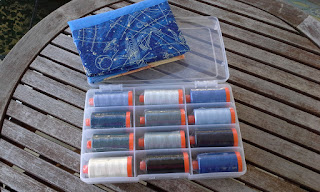 Speaking of navy and other blues, I bought this Aurifil thread set at about half off of retail prices. The collection is called "Tinsel" by Cheri Good. Don't all those blues look pretty next to the celestial fabric? I use Aurifil almost exclusively, and was getting low on neutral thread. This batch has some gray shades along with the blue, so those will be great for piecing. It also has one spool of black, which I was somehow lacking. I use very little black fabric but every sewing room needs black thread! 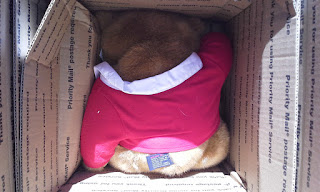 The last box I opened today had this poor stuffed bear crammed in, face down. Good thing he's soft and squishy enough to handle it. 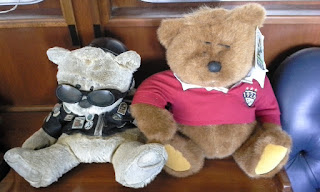 It's a little known fact that Sean and I actually met at a motorcycle rally about 20 years ago. He had a big touring bike with a stuffed dog on the back seat, and soon I replaced my small motorcycle with a touring bike, too, so we could travel long distances together in comfort. My big new bike clearly needed a stuffed mascot, too. The bear on the left, Eddy, joined us around 1999 or 2000 and has been sitting on the back of my various two-wheeled vehicles for over 75,000 miles. About 10 years ago, we downsized to scooters, and our cheerful stuffed companions learned to travel shorter distances at lower speeds. 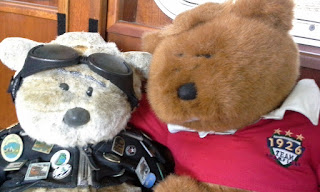 On the boat, the scooters are "parked" on the upper deck, in full sunlight and exposed to lots of salt air. After so many years, Eddy was really starting to show his age. The soles of his feet are peeling, his fur is shedding, and he's gone completely gray. He told me not too long ago that he was ready to retire and pass along his duties to his son, Eddy Jr.

Eddy is a 1996 Lands' End holiday bear, made by Gund in just that one year. I would have never believed that I could track down another one, but the Internet makes just such a search possible. Lo and behold, I found Eddy Jr. in mint condition, ready to take over. Yes, those are the exact same model and color of stuffed bear. After at least 15 years and thousands of miles, I guess we all get a little shorter and grayer! Eddy Sr.'s red rugby shirt shredded years ago and was replaced with his little leather jacket. When it came time to move the jacket to Eddy Jr., I found the zipper was completely frozen, so I'm going to let the old dude keep it. Junior is happy to have the beanie helmet, but will have to earn a new jacket. 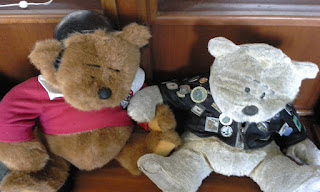 Eddy Sr. has passed the baton to Eddy Jr. and is officially retired. He's asked us to take the boat back to Florida soon so he can start looking at condos in senior communities.