Three for the Navajo Nation 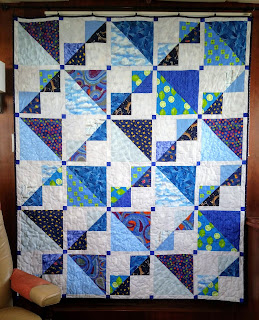 Today's finishes were all made for the charity Quilts Beyond Borders. As one of their many initiatives, each year around Christmas they distribute quilts to people living on Navajo lands. 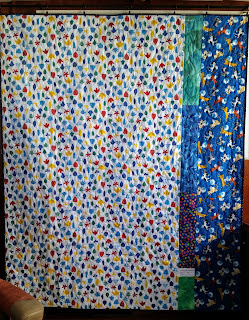 While many of the folks receiving QBB quilts are children, the Navajo ones are also distributed to adults. So these pieces are a little bit larger than usual. I made this one after seeing a photo of a similar quilt. It's two sizes of HSTs, set so the lights and darks make a criss-cross pattern. 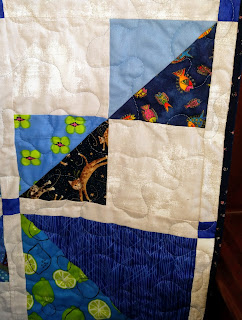 The fabrics are modern, yet fun, and include stars, cats, lemons, fish and other random whimsies. 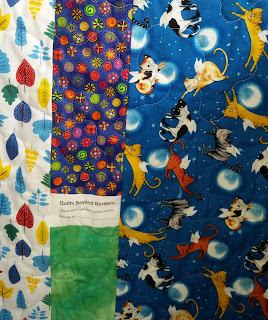 The back is this nice leaf fabric in primary colors on white, plus some scraps from the front. The leaves are fancy organic cotton, but I bought yardage for a song on eBay. It should get softer and cuddlier with each washing! 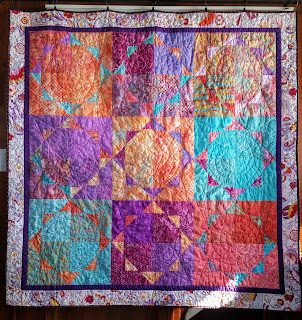 The second quilt is the pattern Magic Stars. I first saw this fun design on Joy's blog when she featured a tutorial by Tiffany. It's a great way to use a layer cake, and I had this fun batik set in purple, orange and turquoise. I also had a swirly purple and orange fabric that made a pretty border to get the size right for an adult lap. 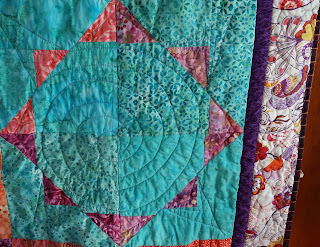 The Magic Stars look like a child's drawing of the sun to me, so I emphasized that with quilting. Swirls in the center and dot-to-dot triangles around the sun rays. 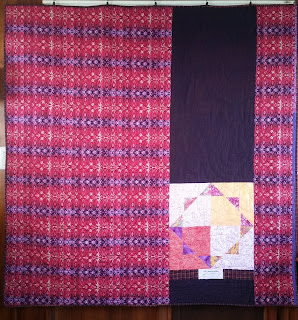 The pattern made 10 big star blocks, which is an awkward number. So I set nine of them in a square layout and put the tenth on the back with some coordinating purple fabrics. 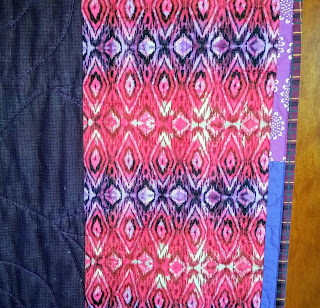 I was quite happy with that backing, right up until I was basting the quilt sandwich and realized it was just a smidge too small. How big is a smidge? About as wide as these tiny strips of purple on one edge. That's how much more I needed to add, sigh. You can see the fun purple and orange plaid binding in this photo, too. 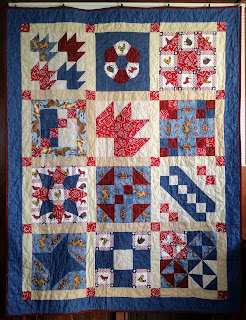 And finally, this quilt is an eBay bonus buy. While looking for larger chunks of yardage to use as backings, I found a listing for about 20 yards of chambray, red bandana print, and red/black check. Perfect! Also included were some 12" blocks made of the same fabrics. Well, heck, I can use those, too! All I had to do was add sashing, cornerstones and borders and this little quilt just sewed itself. 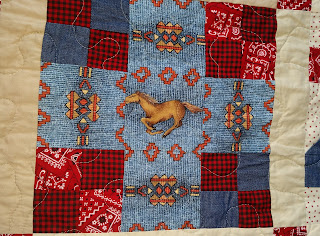 Many of the blocks also included this running horse print. This block included most of the horse, but several stand alone horse butts are also featured. I hope that will amuse the recipient as much as it did Sean! 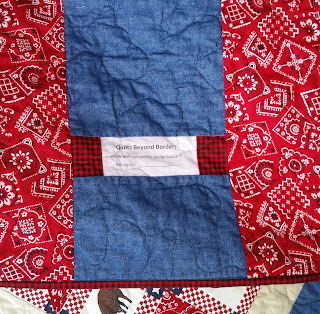 I used some of the chambray and bandana for the backing, and the binding is the check. I have tons of all three left over for more backings. Even though these fabrics were probably originally from the late '90s/early 2000s, the designs are timeless.
So there you go, three quite different quilts heading west to provide warmth, comfort and perhaps some entertainment. Which one is most your style?
Posted by Louise at 1:37 PM

Email ThisBlogThis!Share to TwitterShare to FacebookShare to Pinterest
Labels: ebay, quilts beyond borders

Fabulous quilts as usual and I love the stories that go with them... and what a wonderful place to send them to....kChristmas is on its way...
Hugz

As always, I am impressed with what you come up with. Thanks for the inspiration and for sharing.

Very fun and colorful quilts. I'm having a hard time picking a favorite, I like each one for a different reason. You made good use of your bargain buys, these will be much appreciated by the new owners.

Great work on all of them Louise, but the first one peaks my interest most I like that layout. Have you counted up the number of charity ones you have done so far this year?

As much as I like the fun secondary pattern formed in the first quilt, I absolutely LOVE your completed Magic Star quilt. I'm SEW glad you made such good use of the tutorial on my blog, Louise!!

Wonderful quilts! I like the way you sashed and cornerstoned (made up word) the first quilt right to the edge and used that as the border - looks neat. The second one has a beautiful pattern and I love the fabrics. The third is probably my favorite. I looked at closeups of the horse butts - lol! And I love the blocks and fabrics and the sampler look of it. I find myself drawn to "older" fabrics from the 1990s-2000s.

Those short by a smidge issues aren't fun, but you found a good solution. The Magic Stars are intriguing; I haven't looked up that tutorial yet, but may have to. Nice work on the quilts, Louise!

very nice and excellent choice for distribution...we owe native peoples so very much...whatever we immigrants do for them is only a thimble full...

This should give you a chuckle. I twice read bandana as banana and couldn't figure out what you were referring to. Must be I'm not getting enough fresh air. You are such an inspiration in both your charity work and your creativity. I'm curious though, about how you receive the fabrics you order when you are constantly on the move in the boat?
Pat

It's hard to choose a favorite - they all look great and I'm sure they'll be appreciated by the recipients. I'm intrigued by those magic stars - thanks for the link to the pattern.

Since you asked for a favorite I think I would have to say mine is the second quilt. Now tomorrow when I look at them it will probably be a different choice. :)
There you went again ... putting on your genius cap & solving the smidge dilemma. What a great fix to a frustrating situation.
I too want to know how you get packages while you are traveling...
Great show of quilts for a great cause.

Yea for the Magic Stars block. I tried one and really like it but now it’s in time out until I can try making more to go with. You’ve done an excellent job with prepping and finishing these quilts. You’ve been really busy. I can’t figure out where you stash all your fabric! Are you working your way south yet?

Three splendid quilts to donate and you ask which is most our style, the first quilt is more me, I think it's a fantastic illusory type pattern. So very effective but just using good old HST blocks and sashing and could be made in plains or patterns I should think.

All three are terrific and will be cherished I know. I love the ‘play with your eyes’ of the first one but there’s something about the sun one (circles, sun) that I love. Love the quilting you did Louise.

My favorite is the second one. But they are all wonderful. Thank you for your caring heart.

Those are such great quilts, and a great destination for them, too, Louise! I love the Magic Stars blocks and always thought they'd be perfect for just the right layer cake. You definitely had the right one for that quilt!

How fun are these!!! My favorite is Magic Stars. But the cowboy quilt is a close second. Living in cowboy country, I'm partial to western themes. Fun to see your creations, Louise!