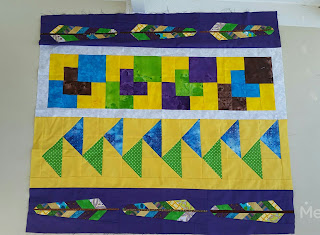 This little top is called a Row Robin, and is made of rows of quilt blocks sewn by different people and mailed around the country. The name is a play on "Round Robin," where the blocks are sewn around and around a central medallion. This one was started by Spoon, a member of my online quilt guild. He made the overlapping batik squares and set the color palette of the piece. So bright and cheerful! Then Kathleen added flying geese so it could fly away to me. I must have had geese on the brain, because the idea of adding feathers popped into my head and wouldn't leave until I made them.

I used a free pattern by Anna Marie Horner called Feather Bed to piece the blocks. The original size was a bit too big, so I reduced the templates on my printer to end up with three across. I then made this test block with a gray  and black background fabric. Not only was the background too busy and jarring, I messed up the math and the feather was too small. But it worked as proof-of-concept, so I reprinted the templates and changed to the dark purple background. Much better!

These feathers were fiddly and fussy (and folded funny in the photo,) so I'm glad I only had to make seven of them. If I tried them again, I might use striped fabric instead of strip piecing.  But that's part of the fun of a collaborative effort like this, to try something new!  Now this little robin will flutter to it's next destination at Carol's house and then eventually back to Spoon to be finished.

I tried one of those feathers and threw it away.....fussy and fiddly was not for me! So congrats on 7 of them.....actually the one shown is great!

I love those feathers! Such a great addition to the quilt. That Row Robin sounds like fun - I’d love to find something like that to participate in. But anyway, congrats on a great idea and beautiful execution!

So striking. I love the purple background, but I like the feather you rejected, too. Maybe it will find its way into another project. Just curious: does each person add their own fabric or does some fabric travel with the top? It all works really well together so far.

That's such a pretty little top & what a great idea for a Row Robin. I love the color combos in it & the feathers were perfect. You've got to love it when an idea pops into your head & the finished results are just what you were thinking about! Congrats to all of you for such a pretty little masterpiece. Will we be able to see it finished?

Your feathers fit right in!

You were a very brave feather maker! Such a neat addition to the round robin.

I love this idea! What fun. I think I have that feather pattern sitting in my "want to make" pile. I should maybe make some notes on the pattern, "Louise knows how to make these" :-)

I think I like the idea of a row robin better than a round one :) Love the addition of the feathers! It was a perfect choice.

You wouldn’t know they were fiddly by the end product - they are gorgeous feathers. The first background is really interesting but the purple was better for this quilt. Lovely row robin!

Those feathers are just perfect for the piece and look great.

That is a fun-looking project, and I think your feathers are perfect for it. We have to push ourselves out of our comfort zone now and then, right?! You must have a project in the Row Robin group that others are adding to - I'll look forward to seeing it!

Too much fun, Louise! When I have a fiddle project like that, it takes me forever! You did good and it came out just grand!

I really used to like doing robins — round or row— because I always put more into it than my normal let's make an easy quilt. The feathers really look good with the rest. I’m glad I’m not having to come up with something for this next!

Wow, your feathers addition is stunning! Love seeing those original blocks which I bet are Alyssa's 'Up From Here' pattern, and then the migrating geese ones which I've also done! Now to visit the Anna feathers link...

Wonderful! The whole thing has a kind of southwest vibe to it even though the colors aren't typical southwesty. I LOVE your feathers! And I really like that concept of adding rows instead of rounds. Not as much math involved!

Those feathers on the dark background were the perfect addition to the project. It's going to be a very fun quilt.

Love the bright blues and yellows in this quilt, and you were brave with all the feathers, I once made two for a cushion and they were quite enough!

An Anne Marie Horner feather quilt was one of the first I saw when I started blog reading . It really encouraged me to not only sew but blog . And look where that got me . Love how your round robin is going