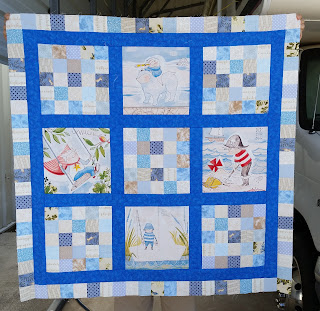 Lol, yes. In sewing as in life anytime things suddenly get better be suspicious :-). Thanks for linking up!

What a cute boy quilt!

Whoops!! That's one way to maximize your quilting dollar... sew the fabric twice. Have fun with the quilting!

OMG Joyful Quilter-hahaha, that was a good one! I love your use of the little panel blocks, good way to stretch it into a useful quilt. I cleaned my secondary machine yesterday-yikes I could have made a quilt and used it for batting! Since I don't use it often I forget to clean it!! I am betting it might sew differently now, LOL

It's interesting how we get to know the sounds of our machines so keenly. The quilt looks so sweet.

very sweet quilt.... it's interesting to know how we get to understand the sounds of our machines..
Hugz